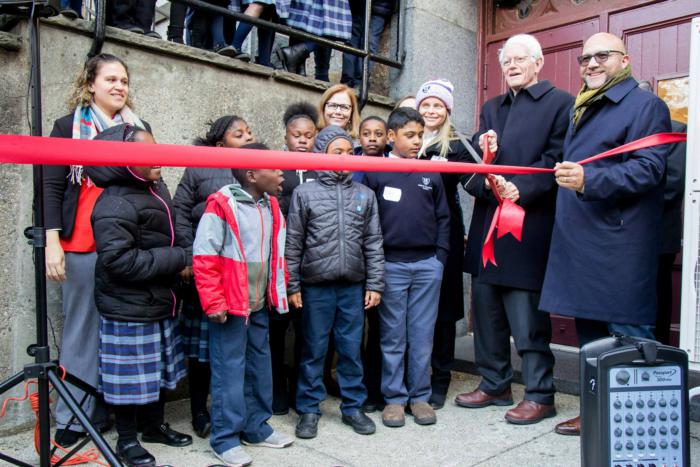 ROXBURY -- Shawna Lymon held an infant on her lap, bouncing him up and down occasionally, and talking softly to him when he began to fuss. Cradles lined the walls around her, and a play area, complete with building blocks and other infant toys, lay across from her.

"This is my fifth year here," she said, gesturing to the space around her -- the Basilica of Our Lady of Perpetual Help's Mission Grammar School in Roxbury.

In late November, the school officially opened a new space designed for infants as young as three months old and toddlers. Previously, the youngest students to be enrolled in the school were pre-K.

Prior to the opening of the space, Lymon worked as a teacher's aide for four- and five-year-olds, but now, she is one of two staff members working with infants.

"I've always loved babies, so I fit right in," she said with a smile.

On Dec. 4, Mission Grammar School held a ribbon cutting ceremony for the new space, inviting guests and benefactors to tour the new area before the ceremony and speaking program, as well as a dedication of the space by Father Joseph Tizio, rector of the Basilica of Our Lady of Perpetual Help.

Among those attending the ceremony was Kathy Mears, superintendent of Catholic schools in the Archdiocese of Boston; Peter Lynch, head of the charitable Lynch Foundation, and State Rep. Jeffrey Sanchez, an alumnus of Mission Grammar.

During the ceremony and speaking program, Lynch told those gathered that he "couldn't be more excited" about the program.

"This is really the single best thing we've done for our schools," he said.

"This is really 10 years in the making," said Aliece Dutson, principal of Mission Grammar told The Pilot after the ceremony. "We've partnered with the Peter Lynch Foundation since 2007, and we are really doing what we know is good for kids."

The new space can accommodate seven infants and nine toddlers, and is filled with books, toys, and educational and creative activities. Currently, there are two infants and six toddlers enrolled, but the school believes it will be at full capacity by the end of the year.

"Eighty percent of brain development happens before the age of three, so we're able to get our scholars earlier and younger and be able to support whole families," said Dutson.

"Our kids are on the road to college starting at three months," she continued. "This is what we're meant to do."

Superintendent Mears told The Pilot that, to the best of her knowledge, Mission Grammar is the first Catholic school in the archdiocese to have an infant program, but will likely not be the last.

"I think this is a new step for Catholic education in Boston, and I think other schools will be following suit," she said.

"We really want to be supportive of families and parents, and this is one way we can do that."