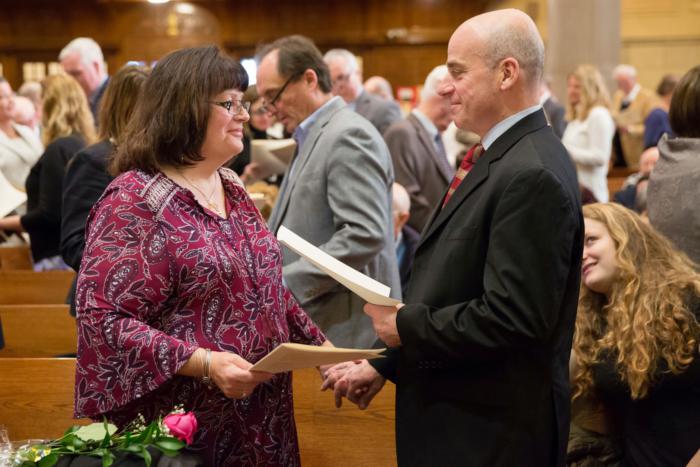 'The following day (11/19) I returned to Boston to celebrate the annual Mass for couples celebrating their 25th and 50th wedding anniversaries, which was held at Holy Name Church in West Roxbury.' Pilot Photo/CardinalSeansBlog.org

Last Thursday (11/16), I was visited by Bishop John Kirby and Brian Hanley of the Irish Episcopal Council for Emigrants, who were accompanied by Father Dan Finn and Sister Marie Prefontaine, SNDdeN from the Irish Pastoral Center in Dorchester. Bishop Kirby was in Boston this week for activities surrounding the 30th anniversary of the IPC, including a special Mass on Saturday which they presented the Papal Order of St. Sylvester to Geri Garvey, a woman with a long history of service to the Irish community in the United States.

Continuing on the Irish theme, that evening I attended The Ireland Funds' annual gala dinner at the Westin Hotel in the Seaport District. It was a grand affair with about a thousand people coming out to support the work of this organization that raises millions of dollars each year to fund charitable and community programs in Ireland and also for the Irish diaspora.

Bishop Kirby was with us for the gala, along with Consul General Fionnuala Quinlan and Irish Ambassador Daniel Mulhall and a host of local business leaders and philanthropists. I was very happy to give the invocation at the dinner at which Peter Lynch was honored for his many contributions to the community.

...During my time in Detroit, I stayed at the parish of St. Bonaventure, the parish where Father Solanus lived. I was very impressed with the altar of the church. It was a very German community and so, in the style of the Old World Capuchin monasteries, the altar was of unpainted, carved wood in the main church, and behind the altar is a small chapel where the friars pray their office. On the altar they have two statues: one of St. Bonaventure, who was a Franciscan Cardinal (and because the founder of the province was named Bonaventure) and another of St. Francis -- of course, dressed in a Capuchin habit! Saturday (11/18), was the beatification Mass at Ford Field in Detroit. About 70,000 people came out for this extraordinary event. Cardinal Amato, the head of the Vatican Congregation for the Saints, presided, acting in the name of the Holy Father. There were many bishops and priests present, as well as about 400 Capuchin friars. It was a great day for the Capuchin community and for the people of Detroit, where Father Solanus Casey is so revered.

The following day (11/19) I returned to Boston to celebrate the annual Mass for couples celebrating their 25th and 50th wedding anniversaries, which was held at Holy Name Church in West Roxbury. We hold this very important event every year as a moment to celebrate marriage and thank the couples for their fidelity to their vocation and for the witness and testament that they give in today's world, where the vocation of marriage needs to be held up for our young people to see.

I was pleased to see that among the anniversary couples was Mary and Bob Wilson, the parents of Father Richard Wilson who was my priest secretary in Fall River and who is now the Rector of the Cathedral of St. Mary in Fall River. In my homily, I spoke to the people a little about my experience in Detroit, and afterwards, as we were taking pictures, many people produced holy cards of Father Solanus that they carry in their wallets. I was very touched at seeing how widespread the devotion is to this newly beatified friar.

That evening, back at the Cathedral, I had dinner with Metropolitan Methodios and Father Ted Barbas of the Greek Orthodox Metropolis of Boston.

It was a chance to greet the Metropolitan and catch up on some of the different happenings in our communities. I was also pleased to be able to tell him that the Metropolitan of Detroit was present at the beatification of Father Solanus.