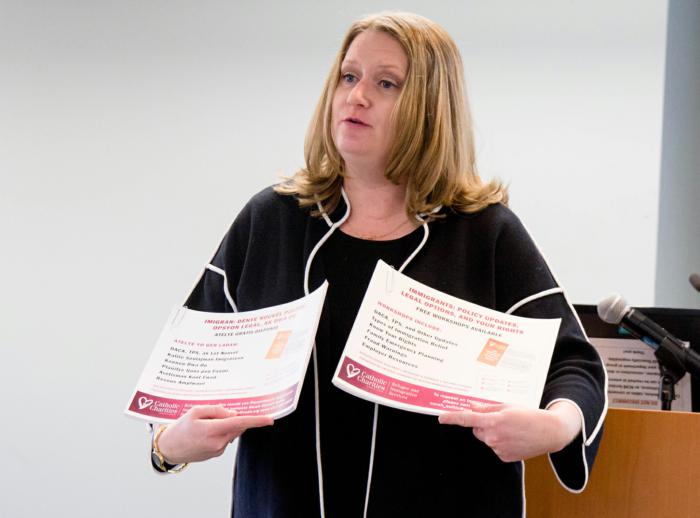 BRAINTREE -- Responding to the Nov. 20 announcement by the Trump administration's decision not to renew Temporary Protected Status (TPS) for the nearly 60,000 Haitians living in the U.S., the Archdiocese of Boston held a Nov. 28 conference for pastoral and Catholic school leaders to address concerns and answer questions on TPS.

The presentation, held at the Pastoral Center in Braintree, was held days after Cardinal Seán P. O'Malley condemned the administration's decision, calling it "neither required" not "morally right" in a Nov. 22 statement.

"An action that would deport thousands of men, women and children to the poorest country in the Americas contradicts the image we hold of ourselves and the leadership we seek to provide for the world," the cardinal said in his statement.

That sentiment was continued during the Nov. 28 conference that was led by Father William Joy, assistant vicar for administration; Jane Devlin, a canon lawyer with the archdiocese as well as an immigration attorney; and Marjean Perhot, director of Catholic Charities of the Archdiocese of Boston Refugee and Immigration Services.

Devlin and Perhot educated attendees on TPS, which authorizes employment and protection from deportation for immigrants from countries that are deemed unsafe due to violence, economic insecurity, or the aftermath of natural disasters. Currently, immigrants from 10 countries are eligible for TPS.

The status can apply to immigrants from those countries regardless of former legal status in the U.S., although immigrants who have been convicted of a felony or two or more misdemeanors committed in the U.S. are ineligible.

The Trump administration's decision to end the TPS designation for Haiti means the majority of Haitians living in the U.S. and protected under TPS after a 2010 earthquake devastated their home country will have until July 22, 2019, or 18 months, before their status expires.

Earlier this month, the administration announced it would not renew TPS for Nicaraguans in the country, giving Nicaraguans until January 2019 before their status expires. The status of Hondurans is currently being debated, while the status of 200,000 Salvadorans, the largest group of TPS recipients, is set to expire in March 2018.

Attendees of the conference discussed ways to assist those affected by the administration's refusal to renew TPS for the four countries. Getting the ear of lawmakers is key, said Perhot, who suggested parishes and schools write letters to members of Congress voicing their concerns.

"They need to hear more from us," she said of lawmakers, urging attendees to be "the voices" of those in need.

A TPS designation can only be effective a minimum of six months and a maximum of 18 months before it needs to either be renewed or terminated. In addition to refiling for TPS after each renewal, immigrants must also provide a $495 fee, so financial help may be necessary in some cases, Devlin noted.

Those families "really trust us as partners," she said, and so she decided to attend the conference to learn more ways to assist them.

"As an academy, we're going to talk about how we can partner with Catholic Charities and bring some folks into our community," she said.

"I know for a fact that our academy will come together around this and really support our families any way we can."

In a statement issued after the conference, Superintendent of Catholic Schools Kathy Mears said she is "reminded of the story of the Holy Family and how following the birth of Jesus they sought sanctuary and relied on the kindness of others in order to keep their family safe."

"I pray that we can assist families seeking a safe place to raise their family, a place where they have the opportunity to provide for themselves."