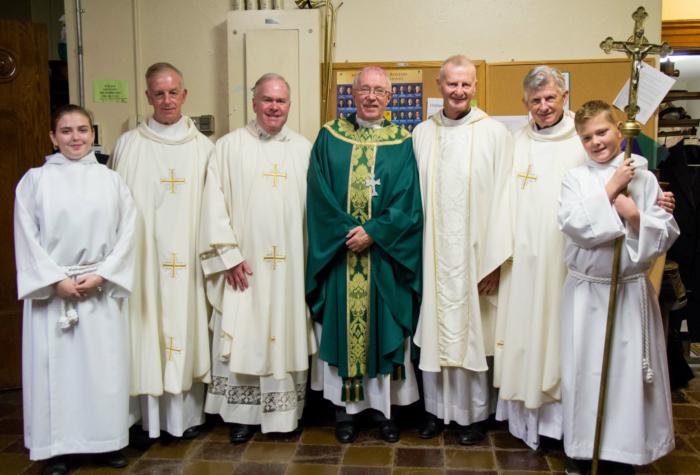 DORCHESTER -- A week of events culminating in a special Nov. 18 Mass followed by an anniversary gala celebrated the 30th anniversary of the founding of the Irish Pastoral Centre (IPC) of Boston.

Located in Dorchester, the center was founded in 1987 as a response to the growing Irish immigrant populations in the greater Boston area. Since then, it has provided both documented and undocumented Irish immigrants with pastoral, legal, and social services, and has assisted in their transition to life in United States.

In celebration of its 30th anniversary, the center hosted Bishop John Kirby of the Diocese of Clonfert, Ireland, the Chairperson of the Irish Episcopal Council for Emigrants, from Nov. 13 to Nov. 19.

During his time in the area, the bishop accompanied IPC Chaplain Father Dan Finn on a prison visit, a meeting with the mothers and children from the IPC supported play group, and celebrated or concelebrated a number of Masses at St. Brendan Parish in Dorchester, out of which the center is based.

The bishop also celebrated a special Mass at St. Brendan Parish on Nov. 18, during which he awarded the Papal Award of the Order of Pope St. Sylvester to Geri Garvey, former office coordinator for the U.S. Conference of Catholic Bishops (USCCB) and administrator of the Irish Apostolate USA.

Garvey, a friend of Bishop Kirby's, was unaware of the honor when she flew to Boston for the Mass from Delaware, where she currently lives.

"This just threw me! I had no idea. It's a wonderful surprise," she told The Pilot following the Mass.

"I feel very honored by (Bishop Kirby's) thoughtfulness and his seeking to get this for me," she said.

An anniversary gala at Florian Hall in Boston was held after the Mass and was attended by Bishop Kirby.

Speaking to The Pilot, Sheila Gleeson, Chairperson of the IPC Board of Directors, said the center's 30th anniversary is a "great achievement."

For the last 30 years, the IPC has been "helping the whole Irish community here and helping people to settle in a new city and a new place," she said.

Father Finn praised the achievement as well, but noted that the work of the IPC is far from over.

Himself an Irish immigrant, he and his family arrived in the U.S. in 1964. At that time, he said, the "door was wide open to come here freely." He added that now, "it's like night and day."

"It makes it all the more difficult for people to get here in the first place, and then trying to live here, especially with the president's new executive orders," he said.