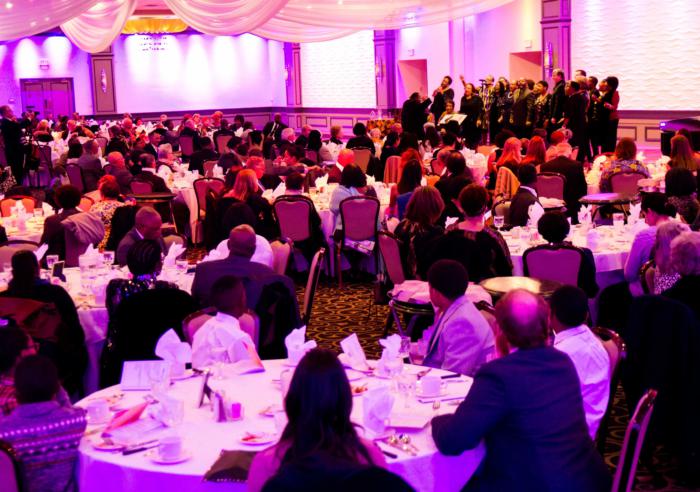 RANDOLPH -- Tchintcia Barros, Sister Joyce McMullen, SND, and Sister Christine Smith, SBS were honored at the 24th annual Bishop James Augustine Healy Award Dinner, held Nov. 18 at Lombardo's in Randolph, for their work on behalf of the black Catholic community of the Archdiocese of Boston.

In a message included in the night's program, Cardinal Sean P. O'Malley, who was unable to attend the event, praised the awardees, saying "their examples of dedication and commitment to the good of our brothers and sisters in the Church and in the wider community are an inspiration for us all."

The evening included an invocation from Bishop Arthur Kennedy, a benediction from Father Paul Soper, and music by the Archdiocese of Boston Black Catholic Choir. The emcee for the event was Marie St. Fleur.

While Barros is an equity portfolio manager on the Large Cap Growth Team at Columbia Threadneedle Investments, and a member of the Boston Security Analyst Society, she is also an active member in her community.

A member of St. Patrick Parish in Roxbury, Barros sits on the Archdiocesan Pastoral Council representing the Cape Verdean community, teaches kindergarten religious education, and is co-chair of the Home and School Association at St. Patrick School. She is also heavily involved in education, and is on the board of trustees for the Catholic Schools Foundation and for the Up Academy Boston/Dorchester.

She has three children with her husband John Barros, and they are expecting their fourth child in April.

Barros was presented with the Healy Award during the dinner, an award which is given yearly to individuals who have provided strong leadership and service to the black Catholic community in the archdiocese.

In her acceptance speech, she thanked her family, her friends, attendees, and the award committee.

"What a privilege and honor it is to receive such a distinguished recognition," she said.

Barros used her speech to speak out about the "enormous wealth gap" between white and black households in Boston, as well as the importance of education, which she said is a tool for closing the wealth gap.

"My parents knew this when they arrived in Boston from Cape Verde in 1977 with little to no assets, and made sure they gave my siblings and me the best education -- a Catholic education," she said.

"They sacrificed and put us through school because they knew it would make a difference in our lives, and it did. That's why I do the work I do in the Catholic School System and in St. Patrick School."

"Our schools serve many of the most amazing students in the city of Boston, therefore it is our responsibility to provide them with the best education," she said.

Sister Joyce and Sister Christine were both honored with the Robert Ruffin Award, which is annually given to an individual who has offered significant service and sacrifice to the black Catholic community.

Sister Joyce joined the Sisters of Notre Dame de Namur in 1962, and since then, has been active in aiding the needy and the poor in the greater Boston area. She heads Project Care and Concern in Dorchester, is on the advisory board of action for Boston Community Development and has helped to refer children to Catholic Charities' summer camp at Sunset Point, which she also works to support.

"I receive this honor in the name of all the people who have journeyed with me over many years in Dorchester as part of Project Care and Concern," said Sister Joyce in her acceptance speech.

Since arriving at St. Patrick's Convent in Roxbury in 2002, Sister Christine has ministered at the parishes of St. Patrick and St. Katharine Drexel. Over the past 15 years, she has provided programs for eucharistic ministers, instruction for visitors to the sick and shut-in parishioners, and a curriculum for RCIA and Adult Sacramental preparation. Sister Christine also ministers to the elderly since the formation of the St. Katharine Drexel Senior Club.

In her speech, she spoke about evangelization, saying that "the future of our parishes depend on our active involvement, our personal commitment, and the faith that we profess."

The keynote speaker of the evening was Sister Marcia L. Hall, OSP. Sister Marcia holds a Ph.D. in sociology from the University of Michigan, and, since joining the Oblate Sisters of Providence, has served as interim principal at St. Benedict the Moor School, assistant principal at the Seton Keough High School, and principal at St. Frances Academy. Currently, she is the vocation director for the motherhouse.

"Let the peace of God reign," she said, beginning her talk. "It sounds like a wonderful idea, especially in this day and time."

People living in places of violence, both around the world and around the country, "they don't know God's peace," said Sister Marcia. It begs the question, "What is God's peace?"

According to the Dictionary of Biblical Theology, said Sister Marcia, Biblical peace indicates a state of harmony between man, God, nature, and oneself.

That is the type of peace we had when we lived in the Garden of Eden, until sin disrupted that state, said Sister Marcia. Yet, "God hasn't given up on our returning to that state of right relationship."

"He has continuously sent us messages and messengers as signs and guideposts," she said.

In particular, it was Jesus who "walked in God's peace," and taught His disciples about the peace of God.

Think about the stories where Jesus healed others, she said, and remember that most of the time, those he healed were cut off from the community due to illness.

In healing those people, and in bringing them back to their communities, Jesus showed the afflicted God's peace, said Sister Marcia.

Since the time of Christ, many others have tried to show us God's peace, she continued. Different leaders in the Church, activists such as Dr. Martin Luther King Jr., and Mother Mary Lang, a co-founder of the Oblate Sisters of Providence, have all tried to show the world God's peace.

"This evening is an opportunity to acknowledge people in the Archdiocese of Boston who are expressing through their parish ministries and other community affiliations their desire to be in right relation with God and with others," said Sister Marcia.

"They are examples of the disciples that Christ called all of us to be."