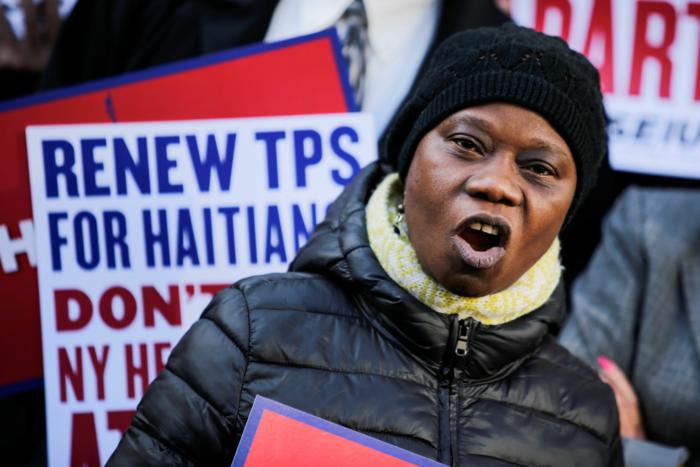 A woman participates in an immigration rally for Haitians Nov. 21 in New York City. The Trump administration announced Nov. 20 that Haitians with Temporary Protected Status must leave the country by July 22, 2019, or face deportation. (CNS photo/Eduardo Munoz, Reuters)

BRAINTREE -- In a statement released Nov. 22, Cardinal Seán P. O'Malley condemned the Trump administration's decision not to renew Temporary Protected Status for the nearly 60,000 Haitians living in the U.S., calling the decision "unnecessary and unwise."

The decision is "neither required nor is it morally right," the cardinal wrote.

The status, commonly known as TPS, authorizes employment and protection from deportation for immigrants from countries that are deemed unsafe due to violence, economic insecurity, or the aftermath of natural disasters.

Haitians living in the U.S. and protected under TPS after a 2010 earthquake devastated Haiti will now have until July 22, 2019, or 18 months, to leave the country, before their TPS is terminated, the Trump administration announced Nov. 20.

Earlier this month, the administration announced it would not renew TPS for Nicaraguans in the country. The status of Hondurans is currently being debated, while the status of 200,000 Salvadorans, the largest group of TPS recipients, is set to expire in January if not renewed.

In his statement, Cardinal O'Malley acknowledged that the U.S. government has the legal capacity to not renew a country's TPS. But, he said, "the United States can and should do far better."

"As the strongest and wealthiest nation in the Americas we have a moral responsibility to provide care and compassion for our brothers and sisters living here under TPS," he said.

"An action that would deport thousands of men, women and children to the poorest country in the Americas contradicts the image we hold of ourselves and the leadership we seek to provide for the world," he continued.

Boston contains one of the largest Haitian communities in the country, the cardinal noted, and if their protection is ended, "there will be great and suffering as families will be separated and children possibly left behind as parents are deported."

"These dire consequences will not end with deportation," Cardinal O'Malley continued. "Returning to Haiti at this time means going back to a country still struggling to recover from the effects of a massive earthquake, the outbreak of cholera and the recent impact of Hurricane Matthew."

"The Church in Haiti has described how unrealistic it is to propose that 50,000 people be received and resettled into the devastation and poverty in their land."

It is my hope, the cardinal said, that the U.S. Congress and the administration will work to rectify this policy, and it is my hope that the Catholic community "will join other American citizens in calling for a response to our Haitian neighbors".