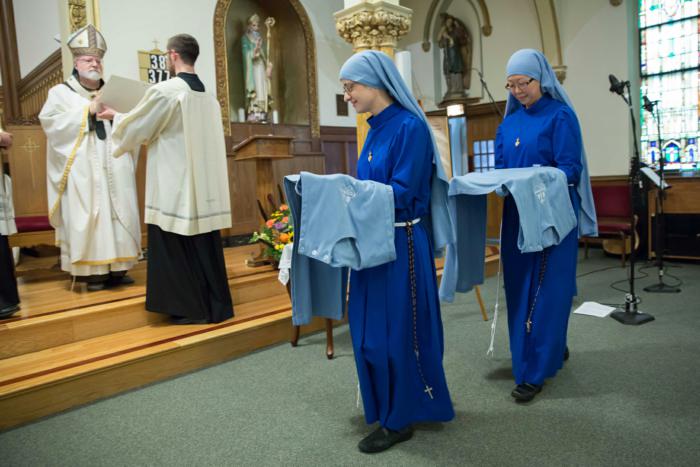 'Sunday (11/5), I went to St. John's in Quincy for a Mass at which two new sisters of the Daughters of Mary of Nazareth made their temporary profession -- Sister Elizabeth and Sister Fatima.' Pilot photo/courtesy CardinalSeansBlog.org

Last Friday (11/3) I was very happy to go to Weymouth to celebrate a Mass to commemorate the 60th anniversary of St. Jerome School.

A number of priests concelebrated with us, including Bishop John Dooher, who is the pastor of St. Jerome Parish.

The school was also celebrating the election of their new student government, and so I presented a pin to each of the new class officers.

That evening, I had one of my regular dinners with seminarians. This time, I met with several of our seminarians in the third year of Theology.

Throughout the year, I always like to invite a different group of seminarians to join me at the cathedral rectory for Vespers, dinner and a time of conversation. It's a way to get to know them better, and I always find it a very uplifting experience.

Order of the Holy Sepulchre

(Saturday, 11/4) I traveled to St. Mary's Church in Bristol, Rhode Island to celebrate the Mass of Investiture for the Order of the Holy Sepulchre Northeast Lieutenancy.

The Mass of Investiture is a very beautiful ceremony, drawing on the order's long history, which dates back to about 1100. The Order was originally comprised of knights charged with protecting the Church of the Holy Sepulcher and other sacred sites in the Holy Land and today, they continue that mission through supporting the works of the Church there.

We were also blessed at having Msgr. Anthony Mancini, the rector of the Providence's Cathedral of Sts. Peter and Paul, have his choir from the cathedral sing for us at the Mass. They were truly magnificent.

This was John Monahan's final investiture ceremony as Lieutenant of our Lieutenancy. We are very grateful for his many years of service and the work that he and his wife Cynthia have done on behalf of the Order. They have done so much to support the work of the Church in the Holy Land, and we are so pleased to see that in the last few years has been such growth in the Northeast Lieutenancy.

Following the Mass, we gathered for a dinner at which they presented me with the Gold Palm of Jerusalem medal, one of the Order's highest honors. I was very humbled to have received it.

The following day, Sunday (11/5), I went to St. John's in Quincy for a Mass at which two new sisters of the Daughters of Mary of Nazareth made their temporary profession -- Sister Elizabeth and Sister Fatima.

We were pleased to be joined by the many priests and sisters who came to be part of this joyful occasion at which the sisters pronounced their vows and received their scapulars, copies of the Sisters' rule, and their crosses.

That evening, I went to our Redemptoris Mater Seminary in Brookline for a dinner they were hosting for some friends of the seminary.

We began our evening with Vespers together, after which we had a wonderful meal, which, as always, included the seminarians leading us in song. It's always a very uplifting experience visiting the Redemptoris Mater Seminary, and I'm sure the friends of the seminary appreciated being there.