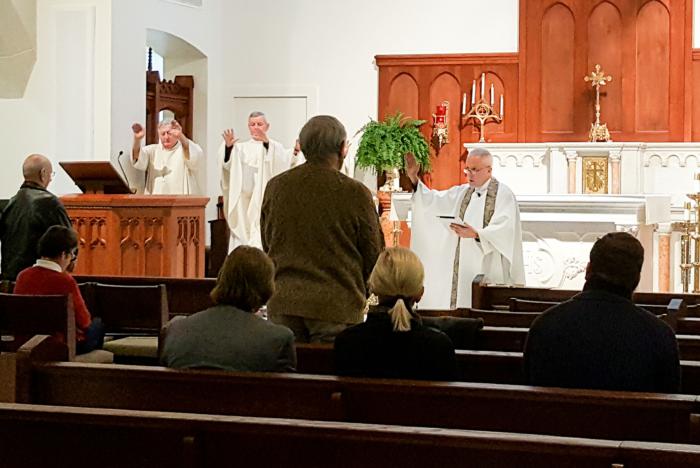 Veterans stand as priest and deacons, led by principal celebrant Father Richard Erikson, hold out their hand in prayer during the Nov. 10 Veteran's Day Mass celebrated at Our Lady of Good Voyage Shrine. Pilot photo/Mark Labbe

BOSTON -- The veterans gathered at Our Lady of Good Voyage Shrine in South Boston bowed their heads as Father Richard Erikson prayed over them during the Archdiocese of Boston's annual Veterans Day Mass, held this year on Nov. 10.

Serving as the principal celebrant and homilist during the Mass, Father Erikson, who himself recently retired from his position Mobilization Assistant to the Chief of Chaplains in the U.S. Airforce, thanked the gathered veterans for their service, saying in his homily that the country is "indebted to our veterans."

He reflected on the Gospel reading, John 15:9-17, in which Jesus tells his disciples to "love one another," telling them that there is no greater love than to lay down one's life for his friends.

"That is the one thing that every single member of our military and every single veteran has in common," said Father Erikson. "That they, we, have been willing to lay down our life for our friends."

"Such is the inspiration of these men and women," he said.

Veterans, he said, have "given us the best that they have."

"Some, the best years of their life, some, literally, life and limb. So, we need to honor them," he said. "As a nation, we need to keep giving them the best that we have."

They deserve "our love and our care," he added, before offering a prayer for all of the veterans gathered.

Herbert Erikson, a World War II veteran and the father of Father Erikson, was one of the veterans who attended the Mass.

The Mass was "fantastic!" a beaming Herbert Erikson told The Pilot.

He served in the Navy during the Second World War, and was stationed in the Pacific on a Destroyer before joining the reserves. When asked if he had any special Veterans Day plans, Erikson said he was simply going to work on his house.

"That's what keeps me going," he said with a laugh.

With tears in her eyes, cantor Joan Wotton told The Pilot it was a joy for her to sing at the Mass, and did so as a way to honor her son, a veteran who spent five years in the U.S. military, as well as "all his colleagues that didn't make it home."

"It was a very tough deployment, his first deployment in Afghanistan" she said of her son, who is a Purple Heart recipient. "He was in the trenches, so, it is very special to be able to sing here today."

Her son has been out of the military for the three years now, Wotton noted, and is doing well. She said she hoped to see him over the Veterans Day weekend.

"I really have him in my heart," she said.