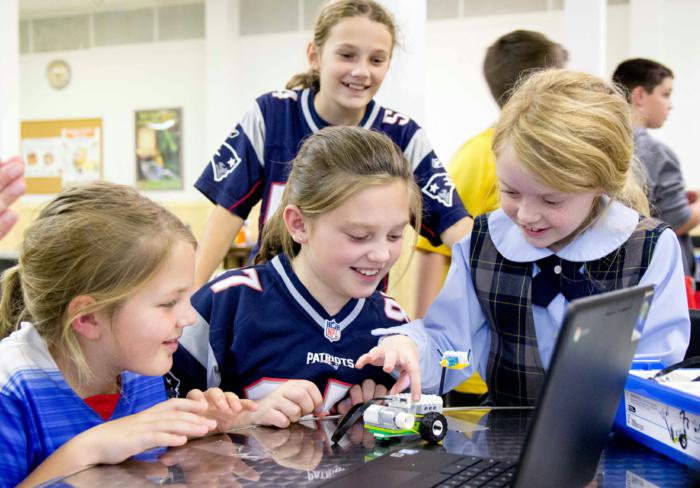 LOWELL -- With a tiny whir, the wheels moved, and the hand-sized robot rolled itself across the table. It stopped for a moment, then quickly rolled backward, back to the middle of the table.

The movement and the design seemed to mimic a NASA space rover, but the robot wasn't on the moon, and it wasn't controlled by professional programmers. It was, instead, in the parish hall of St. Michael Church in Lowell, and was being controlled by young students of St. Michael School who seemed overjoyed to have successfully programmed their first robot in the school's new Robotics Club.

"We're really pushing technology for our school," said Matt Stone, a technology teacher at St. Michael School and head of the Robotics Club.

Stone spoke to The Pilot, Oct. 27, during one of the very first meetings of the new club. All around him, groups of students in grades 3 to 5 were busily building small robots and using Chromebooks to program them to move forward and backward.

The Robotics Club at St. Michael School is relatively new, having begun in earnest at the start of the 2017-2018 school year. Robots are built and programmed with LEGO WeDo kits, which provide the students with an easy-to-use programming software, and building blocks they are already familiar with.

While expensive, the school has currently has 13 kits, after receiving funds through a private donation and then a matching donation from Raytheon. They need the kits, too -- nearly 100 students attended the first meetings of the club, a number that amazed both Stone and the school's principal, Scott Bolton.

Today in schools, said Bolton, "It's all about the 21st-century skills of teamwork, collaboration, and problem-solving." The club provides all of that and more.

While St. Michael School serves students in grades pre-K to 8, the club is only open to students in grades three to five. Yet, said Bolton, a few students in the older grades have also been attending the meetings, and are there to help supervise and aid their younger school-mates when needed.

"It builds a sense of community," said Bolton.

The skills learned in the club will also translate well into the classroom, as Stone explained he will be incorporating the kits into his lessons.

In the first Robotics Club meetings, he said, students are encouraged to follow the provided LEGO WeDo workbooks, so they can learn new programming skills one step at a time.

However, "once they get the hang of it, I'm going to tell them to pick their own project, or go off the book and do their own thing," he said.