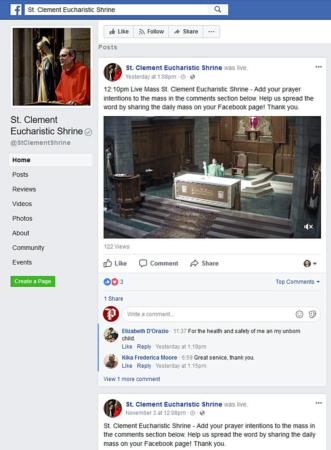 BOSTON -- Social media and Mass generally do not mix. A congregant using a smartphone would surely incur the ire of many fellow worshippers. But what if a smartphone could transport someone to Mass?

"We're trying to stay modern for modern times," said Christopher Kelley, chief communications and marketing officer for the Oblates of the Virgin Mary, who run the shrine. "If the Apostles were here today, I think this is exactly what they would be doing."

The first Mass had more than 1,800 views, 43 shares and 21 comments, including several prayer requests. Since then, the Masses have averaged over 300 views each.

Aparna Raj, who lives in Burlington, commented on the Mass video on Sept. 13, "I feel blessed to be a part of the daily Eucharist, but my schedule as a working professional makes that difficult."

When she cannot make it to Mass, she watches on Facebook and can participate while she is miles away.

St. Clement's is located between Fenway Park and the Hynes Convention Center. The sounds from outside -- firetrucks, the crowds cheering for the Red Sox and the constant drone of traffic on I-90 -- contrast with the silence the space inside evokes.

A Gothic church built in the 1920s, the shrine has a simple, monastic atmosphere. Its vaulted ceilings and sparse ornamentation draw the focus to the altar and up, indicating to visitors that they are in the presence of God.

Patricia Hanlon-Morrissey called St. Clement's "a sacred oasis in the midst of life" in a Facebook comment on Sept. 13.

Speaking to The Pilot, she said that she can feel the tranquility of the space while watching its live Masses.

Many people who attend Mass at the shrine are students or young professionals who do not always stay local. Former congregants now have the opportunity to return.

Melissa Wojcik lived down the street from the shrine and helped coordinate the schedule for the shrine's perpetual eucharistic adoration, which started in 2009. She now lives in southern California, and posted to Facebook on Sept. 27, "Boy, I miss this place."

She misses the inspiring homilies from the oblates. "It was a gift to be near them and learn about their charism."

She also misses the constant availability of adoration.

Christopher Kelley said that adoration is powerful because it affords the opportunity to sit face-to-face with Jesus. "There are so many things that can distract us in the world, but when you have your almighty God in front of you, it focuses and changes your perspective on life."

Kelley said that technology can serve as a distraction and often adds to the busyness of modern life. People spend so much of their time on Facebook that it is imperative for the Catholic Church to meet them there.

With over 2 billion users, Facebook currently accounts for 20 percent of all internet traffic. Over 75 percent of women and 66 percent of men who use the internet have a Facebook account. Most of the Facebook traffic takes place on mobile devices, which increasingly consume more of our time. Two years ago, the average cell phone user spent 21.5 hours a week on their device. This past summer, the number of hours jumped to 35, a 63 percent increase.

Facebook is a great place to broadcast the Mass because of its reach and for other reasons too. If someone shows up to the Mass livestream 10 minutes late, they can start at the beginning of the Mass and not miss any part of it. Facebook also preserves all of its live content, which means people can watch the Mass while they're commuting home on the train or in the evening. If they were particularly inspired by a homily, they have the option to go back and re-watch it days, weeks or even months later.

The live stream also allows Facebook users to comment in real time, adding their prayers of the faithful to the Mass. This creates a digital Catholic community with some users requesting prayers and others praying for those intentions. Kelley called it "a movement of the Holy Spirit."

One man prayed for healing of the relationships between his four children. "It would be great to be able to spend the holidays as a family again," he posted.

Facebook offers one more advantage. Every time a user comments, likes or shares the Mass, that information can be seen by all of their Facebook friends.

Kelley said, "It's not only a way to feed people. It's also a way to empower them to evangelize with one simple click."

Just over a month into the Facebook Live Masses, Kelley admits that there have been a few technical hiccups that they are working hard to correct. He adds that the Live Masses are just scratching the surface of what the Oblates have planned for their Facebook presence. They hope to add videos of talks by the Oblates, weekend Masses and Masses at other churches staffed by the oblates. They also want to broadcast perpetual adoration.

"St. Clement's is offering posts that are hopeful, that are joyful, that are peaceful in a space where we might not have a lot of peace or joy," he said. "God has given us a new way to reach out and to evangelize."