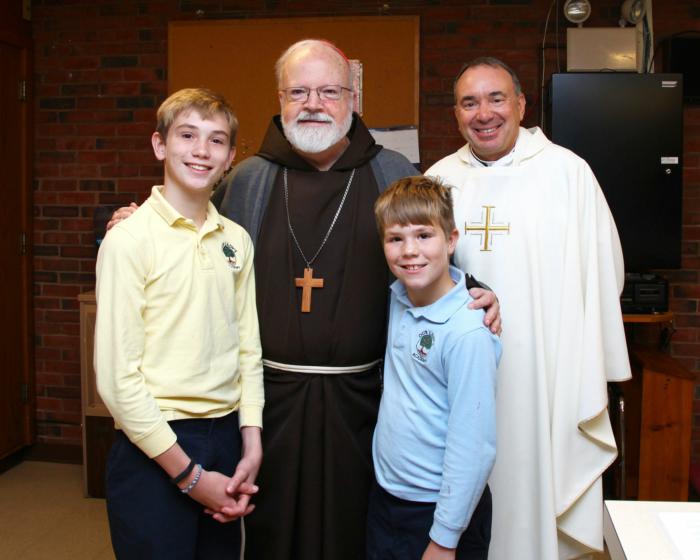 'Last Friday (10/27), I went to celebrate a Mass at Our Lady Comforter of the Afflicted in Waltham to bless the many new improvements to the church building and the parish school, Our Lady's Academy.' Pilot Photo/CardinalSeansBlog.org

Last Friday (10/27), I went to celebrate a Mass at Our Lady Comforter of the Afflicted in Waltham to bless the many new improvements to the church building and the parish school, Our Lady's Academy.

The improvements came about in part to accommodate the impressive growth the parish has experienced over the last several years under the leadership of Father Jim DiPerri. The statistics are just extraordinary: They have experienced a growth of about 45 percent in the number of parishioners as well as a nearly 60 percent increase enrollment in their school.

After the Mass there was a luncheon where I greeted parishioners and took pictures with Father Jim's family and leaders from the parish. It was such an encouraging experience to visit the parish. It shows that diminishment is not inevitable. The parish is very blessed, and the growth patterns there are just stunning.

...I went to St. John's Seminary for the annual celebration of the White Mass sponsored by the Guild of St. Luke for Catholic physicians. The president of the Guild is Dr. John Barravecchio.

Father Brian Hehir was our keynote speaker for the evening and he gave a talk on Catholic Health Care and the Church's Social Ministry.

We were also very happy to be joined by Father George Salzmann who brought along a group of future doctors from Harvard Medical School.

Sunday (10/29), I went to the Blessed Sacrament Church in Saugus to join the celebration of their centennial anniversary. This is just one of the many events that are being held to celebrate the anniversary and we are so grateful to the pastor, Father Tim Kelleher, and all the members of the Centennial Committee that have been helping him in this great effort. We celebrated Mass together and afterwards I joined them for a reception in the parish hall.

Later that afternoon, I went to Boston College for a seminar sponsored by the Church in the 21st Century Center for leaders in the Brazilian community. There was an excellent turnout with about 150 people attending, including a large number of priests. It was an opportunity to hear about their experiences and concerns and learn what Boston College could do to help serve the local Brazilian community.

On Monday (10/30), I went to Haverhill to celebrate two wonderful milestones: the blessing of the new chapel at Holy Family Hospital-Haverhill and the dedication of our Planning Office for Urban Affairs' new development, Harbor Place.

Steward Health Care purchased the former Merrimack Hospital and has brought it into our Catholic hospital system. As part of that, they constructed a chapel in the hospital, and they invited me up to bless it. The head of the hospital is Craig Jesiolowski, who is a Knight of the Holy Sepulchre and who previously ran St. Anne's Hospital in Fall River before coming to Holy Family. I'm very delighted to have him heading up that hospital.

Wednesday (11/1), of course, was the Feast of All Saints and, as I always like to do, I celebrated the mid-day Mass at the Pastoral Center, which was standing room only. A number of priests were also with us for the Mass including Father Walter Waldron and Father Michael Nolan.

...At the Mass we were very happy to be joined by the girl's field hockey team from Ursuline Academy who stopped to celebrate Mass with us before going on to play in their championship tournament.