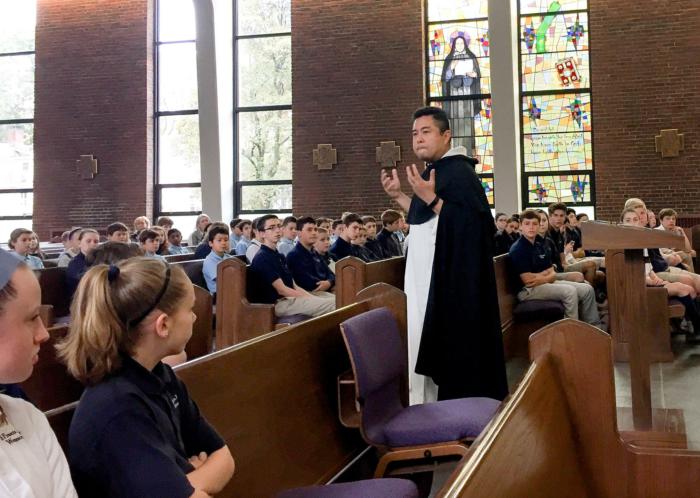 WEYMOUTH -- Dominican Father Nic Austriaco -- a scientist, a professor of biology and theology -- spoke to a rapt crowd of middle school students, teachers, and parishioners Oct. 26 at St. Francis Xavier Church in Weymouth. As a scientist obtaining his PhD at MIT, Father Austriaco encountered many skeptics of religion and Christianity. He said, "For most people today, if you are a scientist, you can't be a believer. Especially a Catholic believer. What I'd like to introduce to you today is that the Catholic faith is a reasonable one."

Father Austriaco spoke about the "Science of Miracles" to bring the heart and brain together. Marking the 100th anniversary of the miracle of Fatima, Father demonstrated to his audience that faith and reason go hand-in-hand.

On Oct. 13, 1917, an estimated crowd of 50,000 people gathered in Fatima, Portugal. In the crowd were believers, but also photographers, scientists, and non-believers. For 10 minutes, during a rainy day, the crowd saw the sun appear, change colors and dance across the sky. Father Austriaco said, "There are very clear descriptions of this miracle taking place. It was a sign that the mother of God left to us to remind us that we live in a world of angels."

He continued, "Most of us live in a world that's made up of matter and we forget that there are angels around us, that accompany us at every turn in our lives. Miracles of Christianity are signposts to remind us that our world is much more than we can see."

Father Austriaco also explained the miracles at Lourdes, France. He described the case of a 22-year-old soldier named Vittorio Micheli, who visited Lourdes in 1963. Micheli had incurable bone cancer and was in extreme pain. After bathing at Lourdes, his pain disappeared, as did the cancer, which was proven medically via x-rays and examinations.

Father Austriaco also discussed the miracle that happens in Catholic churches, every day: the miracle of the Eucharist.

"At the heart of our Catholic faith, we believe that the son of God loved us so much that he didn't want to leave us alone. His father was calling him, so he leaves behind a great sacrament of his Body and Blood," he said.

In December 2013, a clearer sign of this miracle appeared in Poland. A consecrated host was dropped, and following approved protocol, it was placed in water. While in water, red stains -- blood -- appeared. A sliver of the host was tested, and it was found that it contained human flesh composed of cardiac muscle.

This same miracle has occurred in the past, at parishes across the centuries and around the world. Samples of the hosts have been saved, and with modern science, each host has been tested and found to contain human cardiac muscle, and to have the blood type AB, the rarest blood type.

"God does this to remind human beings that we live in this incredible, supernatural world. We are surrounded by power, spirits, angels, and we are loved. This power that permeates everything we see loves you and me. He loves you so much that he took on human nature so that he would die. That cross is a sign of love," he explained.

Father Austriaco finished his presentation by speaking about the rosary. He told students that Mary has asked us to pray the rosary once a day. He added that students could pray the rosary throughout the day: while they were walking to class, getting on the bus, and doing other daily activities. Lastly, he asked the school community to "Dare to become great saints of God."

After the presentation, Principal of St. Francis Xavier School Robert Murphy said, "I am very pleased that our school could provide the opportunity for members of our school community to meet and listen to Father Austriaco. His presentation of the science of miracles was amazing. As a school, our Catholic identity is very important to us. Through his presentation, Father Austriaco helped each of us grow stronger in our faith."

Kevin O'Reilly is the chairman of the St. Francis Xavier School advisory board, and he was the driving force behind bringing Father Austriaco to the school.

He said, "At St. Francis Xavier School we strive to make the beauty and truth of our faith real for our students. We are very grateful that Father Nicanor Austriaco donated his time and talent to St. Francis Xavier School to show, in such a compelling way, an important aspect of our Faith -- the truth and science behind miracles. We look forward to using the community of faithful around us to help our students grow to know, to love and to serve the Lord."