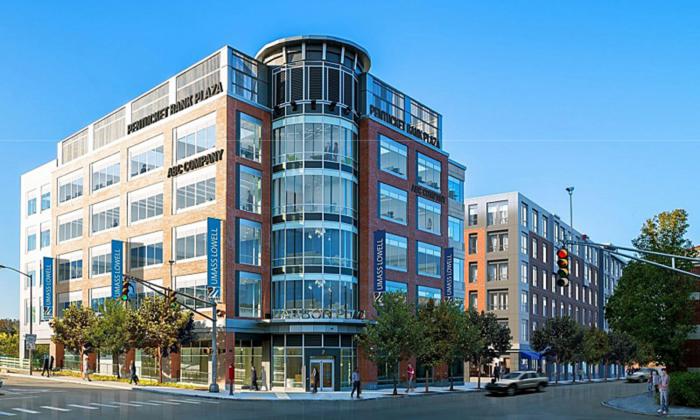 HAVERHILL -- Cardinal Seán P. O'Malley, Secretary Jay Ash of the Executive Office of Housing and Economic Development and Haverill Mayor James Fiorentini were joined by Lisa Alberghini, President of the Planning Office for Urban Affairs of the Archdiocese (POUA), and Ronald Trombley, Managing Director of the Greater Haverhill Foundation for the dedication of Harbor Place, a new mixed-income, mixed-use development in downtown Haverhill dedicated Oct. 30.

"Harbor Place is a wonderful example of the Church partnering with local, state and nonprofit communities to offer families safe and affordable housing," said Cardinal O'Malley.

"Through this development the Planning Office for Urban Affairs of the Archdiocese, in partnership with the Greater Haverhill Foundation, is also supporting new economic growth to help revitalize this once distressed area of the downtown. This is what building strong communities is about and we are blessed to have the opportunity to be part of this wonderful project," the cardinal said.

Harbor Place includes 80 units of mixed-income housing, a five-story commercial building, a new public plaza and a grand boardwalk that brings pedestrians to the Merrimack River in that area of the downtown for the first time in more than 80 years.

The development replaces a former Woolworth building, which sat vacant and abandoned in the downtown for 45 years, and several other vacant or underutilized structures. Of the 80 units of housing, 56 are affordable workforce housing and 24 are market rate. Occupants of the commercial buildings include HC Media, the University of Massachusetts Lowell, Pentucket Bank's corporate headquarters, and office space for rent at the penthouse level.

The new boardwalk provides views of the Merrimack River, which was once hidden by a 10-foot high flood wall. During the event a plaque was unveiled naming the boardwalk after the former Chairman of the Massachusetts House Ways and Means Committee, Brian S. Dempsey, who was instrumental in making the development a reality.

Called transformative by many in and around Haverhill, Harbor Place represents a fresh start to many in the city. As an indication of that, when the Woolworth building was demolished to make way for the new development many local residents gathered on the roof of the adjacent parking deck to observe the building coming down, seeing it as a symbolic gesture to usher in Haverhill's future.