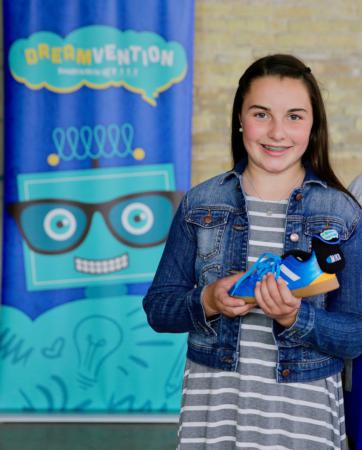 BRAINTREE -- Grace Murphy wasn't allowed to wear jewelry while playing soccer. So, one day before heading onto the field, she put the "very special" pair of earrings her grandfather had given her in her bag. They were missing when she came back after the game, and although she looked, she couldn't find them.

It was in that moment two years ago that Murphy, then a fifth-grader at St. Joseph Elementary School in Needham, started to form the idea for the invention that could now win her a total of $250,000.

Murphy is one of five finalists in the national "Dreamvention" contest, sponsored through a partnership between MAKO Design + Invent, Robert Herjevac of ABC's "Shark Tank," and PepsiCo's Frito-Lay division.

Earlier this year, the contest called on people throughout the country to send in photographs or diagrams of an invention they have created or have ideas to create, as well as a written statement on what the invention is, how it works, and the benefits it could provide.

Judges then culled the submissions down to five finalists, including Murphy.

Speaking to The Pilot during a phone conversation that included her mother Ellen Murphy, Oct. 30, Grace Murphy, now a seventh-grader at Newton Country Day School, said she learned of the contest while watching the TV talk show "Ellen."

She already had the idea for the "Shoe Purse," a small pouch that could be attached to the back of a shoe and used to hold jewelry and other small valuables, after her experience on the soccer field. And Murphy even had a prototype of the invention, thanks to an "invention convention" she participated in during fifth grade.

Her fifth-grade teacher at St. Joseph School, Kristen Fiumara, told The Pilot Oct. 31 that students were asked to come up with a working prototype of their invention for the convention.

Murphy created a pouch made out of Velcro that would stick to the back of a shoe. It was a photograph of that, along with her written statement, that she submitted to the Dreamvention contest.

She learned she was a finalist in September, and was invited to go to Austin, Texas. When she arrived with her mother, she was surprised with a working prototype of her invention, created by MAKO. It was different from her design, as it featured a back that would slip into the back of a shoe, and a zippered pouch, but Murphy was thrilled.

"It was a lot like how I had imagined it," she said. "It was just so cool to actually see it in a physical shape!"

As a finalist, Murphy will automatically win a $10,000 prize. If she wins the contest, however, she will get an additional $240,000 and a chance to speak with "Shark Tank's" Robert Herjevac, to get entrepreneurial advice.

Asked what she would do with the grand prize winnings, she said, "I would donate some of (the money), I would put most of it in savings for college, and then I might go on vacation somewhere with my family."

The overall winner will be decided, ultimately, by the public. On the Dreamvention website, www.mydreamvention.com, people may vote up to once a day on their favorite invention, out of the five finalists listed. Voting ends at the end of the day on Nov. 27, after which a winner will be revealed.

For Fiumara, it is a joy to see her former student go so far in the contest.

Murphy's current school, Newton Country Day, is also excited, and Murphy said people have been spreading the word of her success around the school.

Headmistress Sister Barbara Rogers said, "Our entire school community is proud of Grace, her invention, and the initiative she has shown by participating in this national competition.

"She is a wonderful representative of Newton Country Day, a school that fosters imagination, creativity, and innovative problem-solving in all our girls. We look forward to seeing what she will contribute for our Science and Engineering Fair later this year."