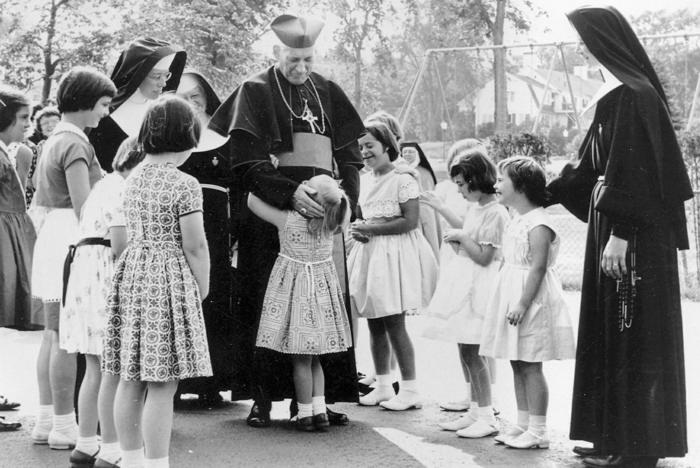 '...Such was his love for these children that Cardinal Cushing chose to be buried on the grounds of the school in a chapel which is a replica of the Portiuncula Chapel in Assisi.' Pilot photo courtesy of The Cardinal Cushing Centers

From there I went to the groundbreaking ceremony for the new Bethany Apartments at The Cardinal Cushing Centers in Hanover (10/23). This new development by our Planning Office for Urban Affairs will provide more than 35 residences for low- and middle-income people in the area.

...Such was his love for these children that Cardinal Cushing chose to be buried on the grounds of the school in a chapel which is a replica of the Portiuncula Chapel in Assisi. Before the groundbreaking, I took a moment to visit the chapel.

I often joke that when I went to the Holy Land for the first time, and people asked me how I liked it, I would always say, "It is wonderful. It's just like the Franciscan Monastery of the Holy Land in Washington!" Well, if you go to the Portiuncula Chapel in Hanover, it is even more beautiful than the Portiuncula in Assisi, because in Assisi they built Our Lady of the Angels Church on top of it. But in Hanover, it's in a very beautiful wooded area, the way it would have been in the time of St. Francis.

Of course, the work that is being done there at The Cardinal Cushing Center with the special needs children and their families is just extraordinary. So, we are so proud of our Planning Office for Urban Affairs for its work in conjunction with them to build new housing there for working class people.

Later that day (10/24), back at the Pastoral Center, we had one of our regular ongoing formation meetings for recently ordained priests. During our lunch together, we had a very nice discussion about priestly spirituality and pastoral challenges. We spoke of the spirituality of a diocesan priest and talked about what kinds of things are life-giving and supportive of one's interior life. It was a very fascinating conversation. We concluded our gathering with midday prayer and a Holy Hour.

Tuesday (10/24), I was very happy to join Regis's annual Let It Shine Gala dinner at the Park Plaza Hotel in Boston.

During the evening, they honored Marshall Sloane, who is such a close friend of all Catholic institutions in the archdiocese. He has also been a wonderful bridge between the Catholic and Jewish communities in Boston, so I was so pleased they chose to honor him. They are doing such wonderful work at Regis and I was so happy to be part of the dinner to support them.

Wednesday night (10/25), I joined the annual "Making a Difference" dinner to support Bethany Health Care in Framingham. During the evening they honored the Massachusetts Council Knights of Columbus, an organization that means so much to our Catholic community. The Sisters of St. Joseph do such wonderful work at Bethany, and so I was very happy come out to support their mission.

Thursday (10/26), I came to greet a group of international priests serving in the archdiocese who were at the Pastoral Center for an enculturation program offered by Father Michael Harrington and the Office of Cultural Diversity. They joined us for our prayers with the Presbyteral Council in the Pastoral Center's Bethany Chapel.