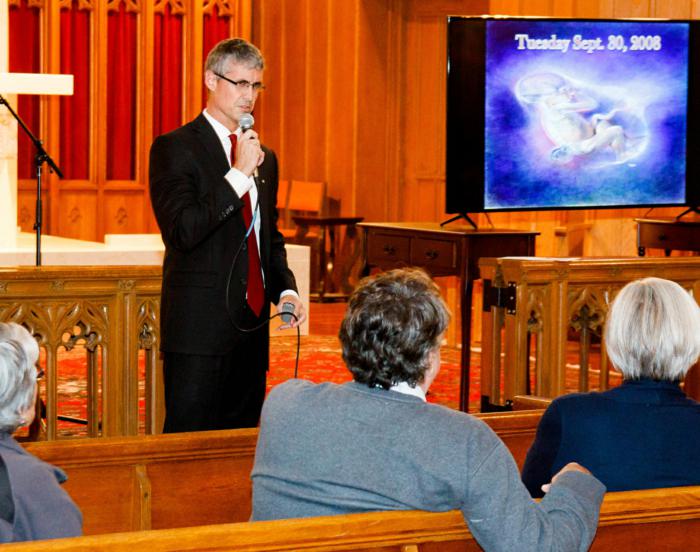 Chad Judice speaks at Our Lady of Presentation Hall in Brighton on the experience he and his wife had expecting, and then welcoming, their son Eli, who has Spina Bifida. Pilot photo/Mark Labbe

BRIGHTON -- If fear sows irrationality and anger, then it is trusting in God, trusting in his love and returning that love, brings peace and joy. That's a belief Chad Judice, a husband and father of three, lives by, and one that he delivered during a talk he gave at St. John's Seminary's Our Lady of the Presentation Lecture Hall in Brighton, Oct. 22.

Sponsored by the Archdiocese of Boston's Pro-Life Office, the two hour long talk focused on Judice's young son Eli, who was born with Spina Bifida, a permanently disabling birth defect that results in the spinal column not completely closing. Judice has written two books on Eli and his family's spiritual journey of having a child with a disability, and regularly gives talks around the country on his experience.

He and his wife, Ashley Judice, learned that their second son would have a birth defect while he was still in the womb. They were told about the complications of Spina Bifida, which, in addition to severely lowering the chance of a successful birth, can lead to limited mobility, gastrointestinal disorders, learning disabilities, and cogitative impairment in a child. Babies with the defect typically require serious surgery immediately upon birth.

Despite knowing these complications, and despite being presented with abortion as an option, Chad and Ashley Judice chose to try to give birth to Eli.

At the time, Chad Judice was a civics teacher at a Catholic high school. He was Catholic, but was not immersed in his faith. At work the day after learning his son would be born with a birth defect, and a co-worker friend asked the students to pray for him. They did, and he started to cry, and he realized then that "God had brought me to nothing so that in the midst of my nothingness I could find Him."

"I found it very easy to let go, and to trust, because I had nowhere else to go," he said.

So, Chad and Ashley Judice turned to prayer, and to confession. They put their trust in God, and slowly saw miracles begin to happen. When Eli was born in 2009, he was born with Spina Bifida, as expected, but it was far less severe than doctors had predicted. He still needed surgery and later in life would need more surgery. He would also have permanently have mobility limitations and other complications. But, Eli, now 8, is happy, and is leading a fulfilling life with his family in Layfayette, Louisiana.

In speaking and writing about his family's journey, Chad Judice said he hopes others in similar situations will find strength and find God, and turn to prayer rather than turn to abortion.

Quoting from his second book, "Eli's Reach: On the Value of Human Life and the Power of Prayer," Judice recounted testimonials given by people who have heard his story, including one couple who recently learned that their child would likely be born with a number of severe health complications. They considered abortion, yet after hearing Judice speak at an event, decided against it.

Unfortunately, the pregnancy ended in a miscarriage, but the mother told Judice that "the pain of losing my child was unbearable, but at least I have closure knowing I will not have to live with the guilt that would have been there if I had had a hand in ending her life."

Following the talk, he signed copies of the book, as well as his first book, "Waiting for Eli," which recounts the moments leading to Eli's birth.

Addressing Judice after his talk, Marianne Luthin, director of the Pro-Life Office, said "you're putting a story and face to the pro-life movement, which is so desperately needed."