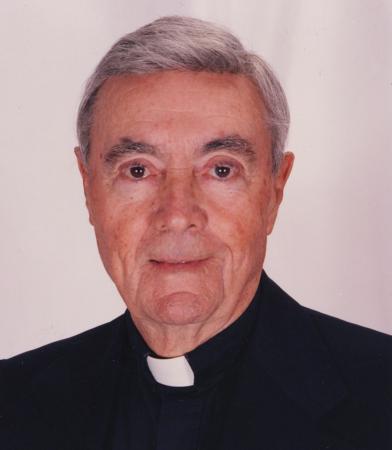 One of the four children of the late Joseph and Mary (McDermott) Alves. He was born on Oct. 4, 1921 and raised in Boston's Mattapan section with two brothers, both deceased, and a sister, Sister Mary (Mary Mention) Alves, CSJ of Fontbonne Convent, Milton.

He was an alumnus of the Boston Latin School and Boston College. He was a pilot in the Army Air Corps (the predecessor of the United States Air Force) during World War II, and was awarded the Distinguished Flying Cross. He was graduated from Boston College in 1944 with a B.A. and in 1948 with a Master's Degree in Social Work.

He entered St. John Seminary as a member of the fall or "second" class of 1953. Ordained on Sept. 29 by Archbishop Richard Cushing -- just shy of his 31st birthday -- he was assigned as an assistant at St. Therese of Lisieux Parish, Everett.

He returned to academic pursuits in 1956 at the Catholic University of America in Washington, D.C from which he received his doctorate in social work.

In 1959 on his return to the archdiocese he became the founding director of the Catholic Family Counseling Services. During his 27 year tenure at the helm of the widely respected archdiocesan agency, he saw its expansion from its Boston offices to other areas around the archdiocese.

He received multiple awards for his outstanding service in the counseling and guidance field. During most of the time he headed up the agency he lived in residence at Sts. Peter and Paul Rectory in South Boston.

Blessed Paul VI named him a member of the Papal Household as a Domestic Prelate (now Prelate of Honor) with the title of Rev. Msgr. Only 43 at the time, he was among the youngest Boston priests so named. He was the sole surviving priest of the archdiocese named a monsignor by Blessed Paul VI.

Bernard Cardinal Law named him pastor of St. Philip Neri Parish in the Waban section of Newton. Located only a few miles from the main campus of Boston College this assignment gave him the opportunity to partake more easily of alumni events and athletic contests; he was a regular and familiar face at reunions and football games at the Heights.

Cardinal Law granted him senior priest retirement status in 1992 and he retired initially to his family home in Milton; then in 1995 to Carmel Terrace in Framingham; and in 1997 to Regina Cleri Residence in Boston's West End.