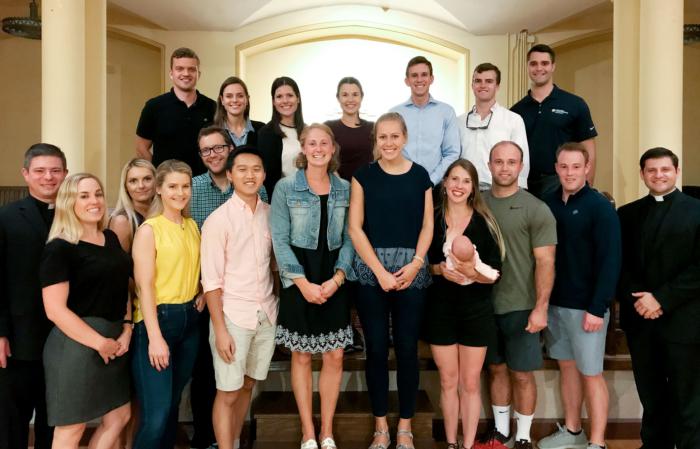 Members of the Catholic Young Adult Committee of Gate of Heaven and St. Brigid Parishes in South Boston are seen at their initial meeting last month. Courtesy photo

BRAINTREE -- Keeping in line with the Archdiocese of Boston's focus on evangelization, Gate of Heaven and St. Brigid Parishes in South Boston are inviting young adults to join the newly launched Catholic Young Adult Committee (YAC).

The committee is the brainchild of Father Tom Olson, parochial vicar of the parishes. Ordained in 2016 as a diocesan priest, Father Olson formerly had been studying at Boston College to become a Jesuit priest. During his time there, he served a pastoral assignment at St. Columbkille Parish in Brighton.

Speaking to The Pilot Sept. 22, Father Olson said he was "struck" by the lack of outreach to young adults, who he characterizes as generally single people between the ages of 22 and 39, at the Brighton parish. So, he created YAC.

Essentially, the mission of YAC, both in Brighton, where it has been in practice for the last four years, and now in South Boston, is to organize social, spiritual, and service events and programming for young adults in the area, in an effort to both deepen the faith of those who are already Catholic and reach out to those who are not.

The commissions are made up for lay young adults, and in South Boston, while the first YAC meeting was held only a month ago, there are already 24 young adults serving in leadership positions across the commission's four committees -- three focused on planning events, and one focused on publicity.

The separate committees will meet somewhat regularly, and then will all come together for quarterly plenary meetings, Father Olson explained.

One of the first plenary meetings for the South Boston group will take place later in October.

Speaking to The Pilot Oct. 10, Jenna DeSimoni, vice-facilitator of the South Boston YAC, said she hopes YAC will host regular, monthly events. While the commission has just begun planning, she expecting to see some outdoor activities and restaurant meet-ups planned for Catholic young adults in the area.

"This is in the early stages, but we're really excited to see what the committees come up with," she said.

DeSimoni, who moved to Boston from California a little over a year ago, joined YAC to become more involved with her parish and local community.

The commission, she said, "is great for the community of South Boston."

Father Olson said YAC currently receives a budget from the parishes, but hopes to fundraise and expand the YAC model to other areas of the archdiocese.