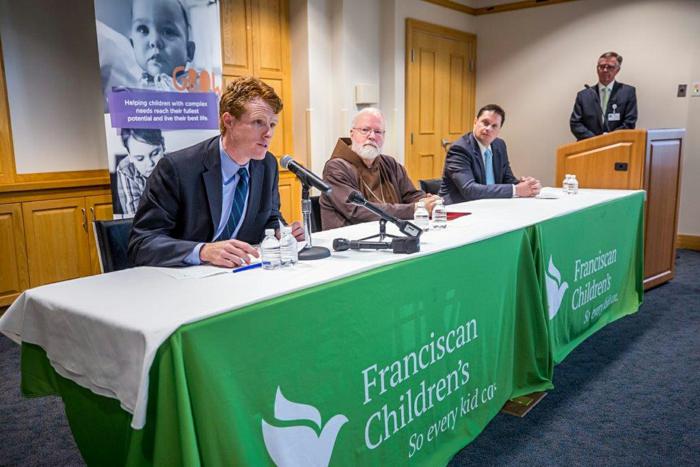 BRIGHTON -- The Archdiocese of Boston has partnered with Franciscan Children's, a provider of pediatric medical and mental health care in Brighton, to launch a new mental health initiative aimed at providing outreach and education.

Announced during an Oct. 2 press conference in Brighton, Franciscan Children's and the Archdiocese of Boston Mental Health Initiative will consist of several key outreach and education opportunities. These opportunities are intended to reach and educate a large number of people across all ages, socioeconomic levels and cultural backgrounds, including immigrant and refugee populations who are part of the archdiocesan community, about the importance of early identification and intervention to treat mental health problems before they reach the crisis stage.

"We are at a crossroads as a society in addressing the mental health crisis gripping our communities here and across our nation," said Cardinal O'Malley. "The Archdiocese of Boston is pleased to have the opportunity to work with Franciscan's Children's in this initiative. Working with our parishes and schools, we are going to reach as many young people and families as possible to educate them with the information and support to save lives and provide hope."

The McLean-Franciscan Child and Adolescent Mental Health Programs will now include an even wider range of acute residential treatment and day treatment options for children in crisis. Up to 33 children will be served at any one time with the expansion, along with continuing their current Pediatric Inpatient Psychiatric Program. This new initiative reflects an expansion that will serve even more children and teenagers in crisis, filling a particular need for mental health care for younger children between the ages of 5 to 14. The existing McLean-Franciscan Pediatric Inpatient Psychiatric Program, which is the largest in the Commonwealth with 32 beds and serves children ages 3-19, will continue to offer crisis stabilization for children needing inpatient mental health treatment. All of the joint program components will be housed on the Franciscan Children's campus.

"The risk of a child or adolescent facing a mental health crisis today is staggering and has no cultural, socioeconomic, age or religious boundaries," said John D. Nash, Franciscan Children's President and CEO.

"We believe that the keys to successful treatment are education, early identification, intervention, effective collaborative care and an engaged team of caregivers. Today, we're energized by the opportunity to work with the Archdiocese of Boston and McLean Hospital, to reach even more children and adolescents in need than ever before," Nash said.

Later this year, Franciscan Children's will also complete a renovation of the Acute Residential Program facilities to include a more child and family-friendly environment, new classrooms, new space for their Day Treatment Program, as well as a new playground to complement the existing gym and outdoor field space.

"For our children suffering from mental illness, access to health care can not only change lives, but save them. Through this collaboration with Franciscan Children's and the archdiocese, we can continue our efforts to end the stigma of mental illness and help our kids receive the treatment they need," said Kennedy.