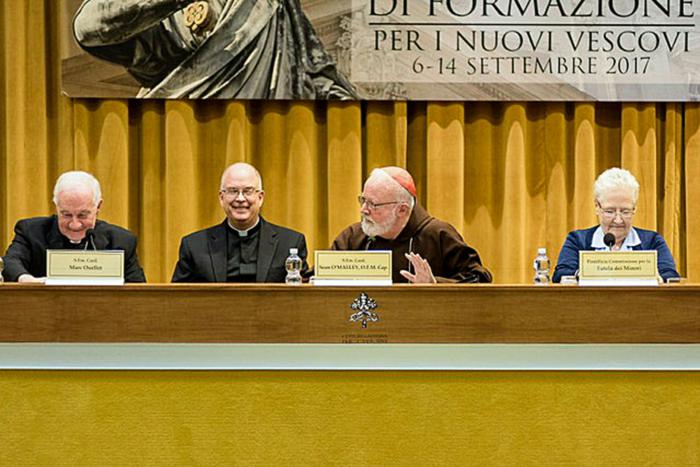 'I arrived last Thursday (9/7), and on Friday, we made a presentation on behalf of the Commission to a group of about 150 new bishops from around the world who have been ordained in the past year.' Pilot photo/CardinalSeansBlog.org

This week I have been in Rome for meetings of the C9 Council of Cardinals advising the Holy Father on the reform of the Roman Curia and for activities of the Pontifical Commission for the Protection of Minors.

I arrived last Thursday (9/7), and on Friday, we made a presentation on behalf of the Commission to a group of about 150 new bishops from around the world who have been ordained in the past year. They were in Rome for the two-week seminar to help prepare them for their ministry as bishops. The group included some 20 new bishops from the United States, as well as large delegations from Italy and Brazil.

I gave them a conference, as the president of the commission, on the very important subject of child protection. I was accompanied by one of our founding members, Marie Collins, who is no longer a member of the commission but continues to help me with the programs of education for Church leadership, as well as the commission's secretary, Msgr. Bob Oliver. We had about a two-hour session, and even after that, many of the bishops approached us with questions. I was very happy to see the bishops so engaged on this crucial topic.

Wednesday night (9/13), after concluding our time with the Holy Father, I traveled to Assisi for a meeting of the Capuchin bishops from throughout the world that was called by our Father General. We met at the retreat house that the Capuchin order has in Assisi.

...There are about 95 of us Capuchin bishops, and about 60 were able to be present. From North America, there was Bishop John Corriveau from Canada, and myself. (Archbishop Chaput was unable to join us.) There were also a number of bishops from Indonesia and Brazil. (Brazil is perhaps the country with the most Capuchin bishops; I believe there are about 25 serving there.)

During our time together, we were able to hear many accounts of the different bishops' ministries. ...Of course, most of our bishops are from mission countries, and many of them are bishops of apostolic vicariates. Apostolic vicariates are in most ways like a diocese, but are in mission areas where a formal diocese has not yet been established. For example, were heard from one of the bishops who is in Ethiopia, where he said he has only three priests in his vicariate. We heard from another bishop in Venezuela whose vicariate serves the indigenous peoples.

...These meetings with the Father General and my brother bishops are always very life-giving. I'm always very moved to see how many of our Capuchin friars are working in very, very difficult circumstances. For us, that is a joy and privilege to be called upon to take on these difficult posts. Indeed, during our meeting, there was a call from the bishops for the young friars to renew their commitment to these difficult missions.

On Thursday (9/14), we went to visit the Sanctuary of La Verna, the place where St. Francis received the stigmata, which is about an hour-and-a-half from Assisi.

...The sanctuary remains a very important place of pilgrimage for many people, and it is a place that is a very important part of our tradition as Capuchins. I made a retreat there only once, over 30 years ago. So, I was very happy to have the opportunity to go back.

Thursday was, of course, the Feast of the Exaltation of the Holy Cross, which was a wonderful time to be in La Verna because it was around the date that St. Francis received the stigmata. In fact, many scholars think that it was the very day of the Exaltation of the Holy Cross, although we celebrate the stigmatization a few days later, on Sept. 17.

Celebration of the Priesthood dinner

...I want to say how much I'm looking forward to returning to Boston and attending our upcoming Celebration of the Priesthood dinner, which will be held Sept. 28 at the Seaport World Trade Center in Boston.

We are so grateful that Roma Downey has made herself available to come and speak to our guests there.

Roma is a woman of the Church who has done so much to promote the message of the Church and family values through the use of mass media, such as her recent television series, "The Bible." We look forward to welcoming her to Boston!