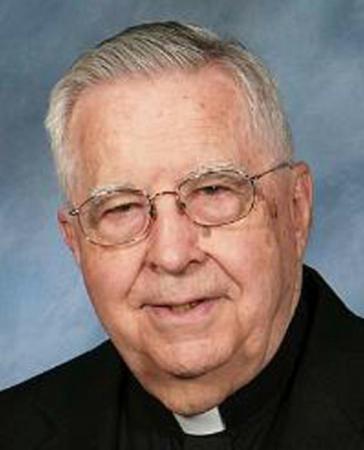 Esteemed by priests, loved by parishioners and admired by his collaborators over the years, Msgr. James E. Tierney died at Regina Cleri on Sept. 2, 2017. He was 92.

The middle child of the late John and Ethel (Duffy) Tierney, he was born in Chelsea on April 29, 1925; the family moved to Melrose and Jim and his siblings John and Helen were raised in St. Mary of the Annunciation Parish. He attended local public schools and was graduated from Melrose High in 1943. He entered the seminary at Brighton and was ordained at Holy Cross Cathedral on May 3, 1950 by Archbishop Richard Cushing.

His first assignment was at an assistant at St. Joseph, Kingston. Just 18 months later he was assigned to the staff of the metropolitan tribunal where he would serve "without a degree in canon law" as he would jauntily remind you, for 22 years. During those years he lived in residence at several parishes: St. Lawrence, Brookline (1951-1952); St. John the Evangelist, Wellesley (1952-1954); Our Lady Help of Christians, Newton (1954-1970) and lastly with the Xaverian Brothers as their chaplain in Malden (1970-1973). For most of his years at the tribunal his boss as head of the tribunal was the late Bishop Eric F. MacKenzie, auxiliary of the archdiocese and officialis (now called judicial vicar); he delighted in relating stories of the bishops of whom he was clearly fond.

Also at the Tribunal with him was the indomitable, Helen Chapman. Nicknamed "Madame Gasparri" for her amazing grasp of canon law (also without a degree) her nick name referenced a great canon lawyer of previous generations -- Cardinal Pietro Gasparri. She and Msgr. Tierney, both Chelsea natives, put a human and often humorous face on the sometimes daunting image of canon law and a tribunal. She was another one about whom Jim loved to tell stories. He was also a great friend of another co-worker at the Tribunal, Msgr. Francis G. McFarland, later Director of Boston Catholic TV.

Blessed Paul VI named Jim a member of the pontifical household as a papal chamberlain (now chaplain of His Holiness) with the title of Reverend Monsignor This was another point of self-deprecation -- "I never got promoted, not sure anyone noticed." A reference to the fact that for almost five decades he was what was jokingly called "junior grade monsignor." That honor came on March 13, 1967.

On Sept. 25, 1973 Humberto Cardinal Medeiros named him pastor of Sacred Hearts Parish in Haverhill's Bradford section. As much as he was esteemed in previous assignments he was loved as the pastor in Haverhill and he loved being the pastor.

During the course of his 17 years as pastor he orchestrated the 75th anniversary of the parish in 1983.

On Oct. 1, 1990 Bernard Cardinal Law named him Director of Regina Cleri in Boston's West End. The archdiocesan residence for many of its senior priests. In the minds of most priests this was one of the best appointments made in the archdiocese.

More than anything he showed himself to be a brother to the senior priests; at 65 he would be considered "retired' in many places but he was energetic and gregarious, attentive to needs and infinitely patient with aging and sometime impatient brother priests. His "director's suite" and his office both had open door policies.

Among other initiatives the two instituted an arrangement so that rooms on the second or nursing floor of Regina Cleric could be available to priests of the archdiocese recovering from surgery or treatments who needed temporary care.