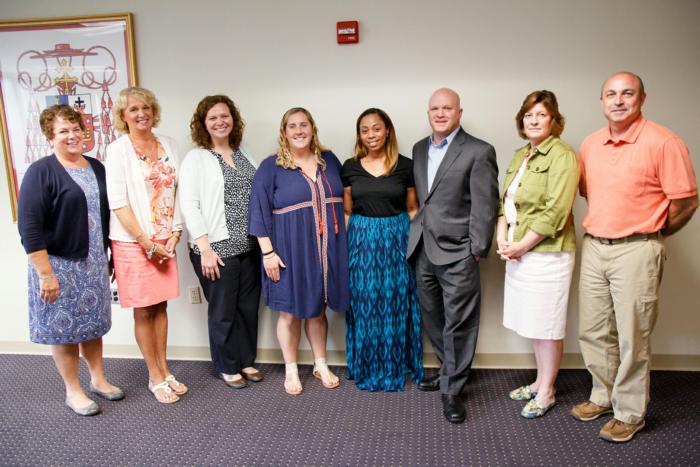 BRAINTREE -- As students begin classes in the new 2017-2018 academic year, several schools in the Archdiocese of Boston have new leadership. The following are among the new top administrators who have recently begun their tenure, listed alphabetically by school.

Regan assumes her appointment after serving as the Head of School at St. Mary's High School in Lynn. Previously, she was the Provincial Assistant and Executive Director of Advancement for the New England Province of Jesuits. Regan served in leadership roles in advancement and alumni at Boston College and the College of the Holy Cross, and holds master's degrees in pastoral ministry, student affairs, and higher education administration from Boston College and the University of Vermont.

Casaletto taught sixth grade for 22 years prior to his appointment. He received his bachelor's degree at Boston University and a master's degree at Lesley College.

As principal, he plans to guide the school through the changes that are taking place in the East Boston community to ensure that it will be able to maintain its identity and continue to provide Catholic education in the city for years to come.

Caulfield served as the vice-principal of Holy Name Parish School since 2000. Prior to that, she worked as a teacher in the Boston Public Schools, and then a teacher and vice-principal at Blessed Sacrament School in Jamaica Plain. She holds a bachelor's degree in education, and holds a Master of Education in administration.

Sullivan comes to Immaculate Conception School after serving as an educator for 12 years in the Diocese of Metuchen, N.J., where she was a teacher at the school of St. Elizabeth in Bernardsville and later a principal at St. Matthew School in Edison. She holds a bachelor's degree in business from Skidmore College and a master's degree in education with a specialization in curriculum and instruction.

Donohue worked at Marian High School as an English teacher and dean of students before his appointment. He received his bachelor's degree at UMass Dartmouth and is currently applying to receive his master's degree in educational leadership.

In his new role, Donohue is developing an advisory period designed to enhance the spiritual, social, and emotional development of the Marian students. He is also working to create opportunities for faculty to develop their classroom skills supporting students on specialized education plans.

Our Lady of the Assumption School, Lynnfield -- Principal Cynthia Donovan

Donovan taught first and 2nd grade, and recently taught 5th grade in a Universal Design for Learning inclusion classroom in Lynn. She received her bachelor's degree from Salem State College and a master's degree in Education from American International College. She currently resides in Lynn.

Oglesby served as principal at Little Flower School in Great Mills, Md. and St. Rose School in Chelsea, Mass. She received her bachelor's degree in elementary education at Appalachian State University and two master's degrees in curriculum and instruction and education administration/Catholic school leadership at Boston College. She currently resides in Medford.

As principal, Oglesby plans to work closely with the administration at Arlington Catholic High School to lead the strategic planning process as the collaboration between St. Agnes and the high school deepens in the coming years.

Merritt has a long career in education, including serving as principal of Our Lady of Lourdes Parish School in Jamaica Plain, principal of Taunton Catholic Middle School, and an assistant professor of education at Emmanuel College. She holds a bachelor's degree, two master's degrees, and a Doctor of Education.

Throughout her career, Kickham as taught in a variety of grade levels at Charleston Catholic in Charleston, S.C., and more recently at St. Agatha School in Milton, where she served as assistant principal prior to her appointment. She holds a Master of Education in Curriculum and Instruction from the University of Massachusetts, Boston, and a bachelor's degree in elementary education and American studies from Boston College.

Prior to her appointment, Sawyer worked as the lead pre-kindergarten teacher and as an instructional coach and transitional assistant. She received her bachelor's degree at the University of Hartford and a master's degree at St. Joseph University.

In her new position, she plans to keep communication between all stakeholders transparent and viable and foster an atmosphere of growth and engagement.

Landry has held leadership positions with a number of organizations, including Our Sunday Visitor, The Catholic Foundation of the Archdiocese of Boston, iCatholic Media, Catholic Voices USA, Good Catholic Leadership Inc., and Boston Catholic Conferences. He is a graduate of Harvard Business School and Harvard College, and is a member of St. Paul Choir's Advisory Board.

Degnan served as head of school at Fontbonne Academy in Milton and principal of Cheverus School in Malden prior to her appointment. She received her bachelor's degree at Worcester State University and master's degrees from Curry College and Emmanuel College.

In her new role, Degnan plans to improve technology and enhance the school's current STREAM program.