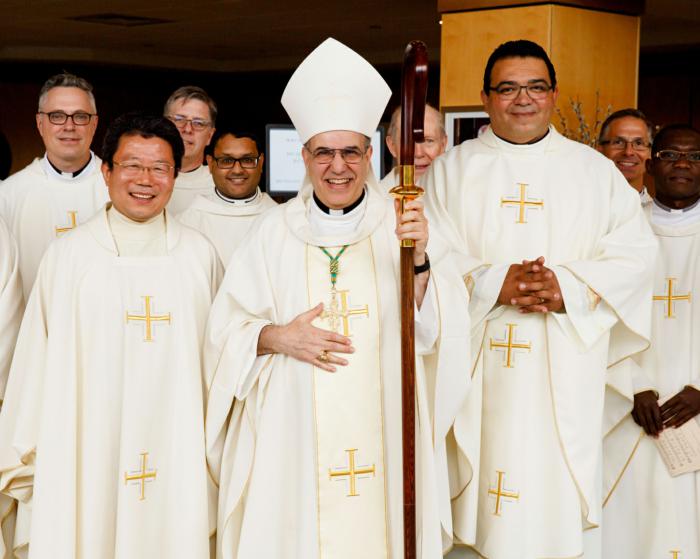 Fathers John Chen and Jose Marques are pictured with Vicar General Bishop Peter Uglietto and priests present for their incardination during a Mass celebrated by Bishop Uglietto at the Pastoral Center Sept. 6. Pilot photo/Gregory L. Tracy

Bishops, priests, and deacons belong to a particular local church (diocese or its equivalent); priests and deacons belong to a religious community (or its equivalent); this happens by "incardination" -- literally being "hinged to." The usual way this happens is when a man is ordained a deacon he is incardinated into the diocese or religious order for which he is ordained. Another way is that the deacon, priest or bishop is moved from one to another, diocese or religious order, and the respective bishops or religious superiors mutually agree to the transfer thus effecting simultaneously both an excardination ("unhinged from") and an incardinaton ("hinged to").

Father John Chen a native of Qingdao, China was born there June 17, 1968. He was ordained a deacon on March 5, 1995 (and so incardinated into the Diocese of Qingdao), the next month he was ordained to the priesthood in Beijing's Cathedral of the Immaculate Conception. After serving in assignments there, he came to Boston and has served in parishes since his arrival in 2004. From his arrival and until 2014 he had served as parochial vicar at Sacred Heart Parish, Quincy. He became parochial vicar at Sacred Heart, St. Mary and St. Ann, when that collaborative was created in 2014; in 2015 he went to Sacred Heart and St. Brigid as parochial vicar in that collaborative. In addition to his native Mandarin, Father Chen speaks fluent English and has facility with both German and Latin.

Father Jose Marques comes to the archdiocese from Brazil. He was born in Mogi Guacu on June 25, 1969. He was ordained a deacon on Aug. 6, 2000 and incardinated into the clergy of the diocese of Sao Joao da Boa Vista. After serving his home diocese he came to Boston and in 2006 was named parochial vicar at St. Anthony of Padua, Allston which has a large Brazilian community. Seven years later he was parochial vicar in two parishes: Holy Family, Rockland and St. Mary, Plymouth. In October 2013 he was appointed parochial vicar at Immaculate Conception, Stoughton and then to the same office at St. James, Stoughton when the two Stoughton parishes joined as a collaborative. He brings a fluency in his native Portuguese as well as English and a firm grasp of Spanish to his parish assignment. 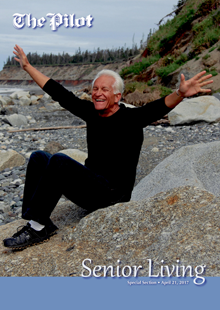