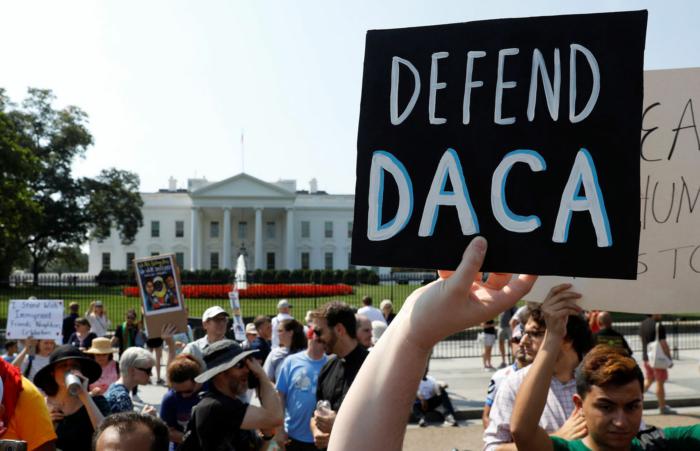 Deferred Action for Childhood Arrivals supporters demonstrate near the White House in Washington Sept. 5. Attorney General Jeff Sessions announced Sept. 5 that the DACA program is "being rescinded" by President Donald Trump, leaving some 800,000 youth, brought illegally to the U.S. as minors, in peril of deportation and of losing permits that allow them to work. CNS photo/Kevin Lamarque, Reuters

Set into place by the Obama administration in 2012, the Deferred Action for Childhood Arrivals (DACA) program grants permission for unauthorized immigrants who were brought to the U.S. as children to work and obtain an education in this country. To qualify, they must have entered the country before the age of 16, have resided in it continuously since June of 2007, and have committed no serious offenses and pose no threat to public safety.

About 800,000 immigrants, frequently referred to as "Dreamers," currently benefit from the program.

Debbie Rambo, President and CEO of Catholic Charities of the Archdiocese of Boston, called the announcement "devastating for families and young people enrolled in DACA."

To give people the ability to work, serve in the military, and gain an education in the United States, only to have that "seemingly taken away," must be "heartbreaking," Rambo said to The Pilot, Sept. 6.

While only around 8,000 Dreamers reside in Massachusetts, over the years Catholic Charities has assisted with "a number of DACA applications." Now, as no new applications can be processed, Rambo said the organization will look for "any other legal pathways at all" for DACA enrollees "to be able to establish themselves here."

The organization will also likely be holding additional "Know Your Rights" workshops, and will be "continue to advocate for passage of immigration reform that includes the needs and issues that are defined by DACA."

"When you see the polls, and the polls say 80 percent of Americans support DACA, one would hope that our Congress would be able to embrace that support and come up with a clean bill that continues DACA," said Rambo.

President Trump signaled the end of the program in an early morning Tweet, Sept. 5, before Attorney General Jeff Sessions formally made the announcement during a press conference later that day.

"I'm here today to announce that the program known as DACA that was effectuated under the Obama administration is being rescinded," said Sessions.

No new applications will be processed as of Sept. 5, and Sessions announced that Congress will have six months to replace or fix the policy with legislation before the administration will no longer renew Dreamers' work permits, which expire every two years.

The dismantling of the program will be a "gradual process, not a sudden phase out," the White House noted in a statement.

In the days before the Trump administration officially announced the phasing out of the DACA program, Cardinal Seán P. O'Malley also called for immigration reform, and urged the administration to keep DACA in place.

In comments made in his Sept. 1 weekly blog post, the cardinal noted that while the current immigration system is "broken and needs to be fixed," DACA, though not a solution, is an important step in providing stability for those who benefit from the program.

"Having ministered to immigrant communities throughout my life as a priest and a bishop, I know these young people are the very type of immigrant that the President recently said he wants to invite to this country -- those who can hold a job, contribute to our society, obey our laws, and serve our country," he said.

"The young men, young women and children currently protected by DACA are doing just that, striving to be productive members of our society; they only want the opportunity to continue to do so."

The U.S. is "indeed a great nation," said Cardinal O'Malley, "and I know the contributions made by these young people protected by DACA will help keep it so in the future, so long as they are given the chance."

According to a statement released by immigrant advocacy group FWD.us and signed by hundreds of business leaders and entrepreneurs representing some of the country's largest organizations including Amazon, Apple, and Facebook, more than 97 percent of Dreamers are in school or in the workforce, 16 percent have purchased their first home, and five percent have started their own business.

If protections were to end and the Dreamers were to be deported, the group estimates that "our economy would lose $460.3 billion from the national GDP and $24.6 billion in Social Security and Medicare tax contributions."