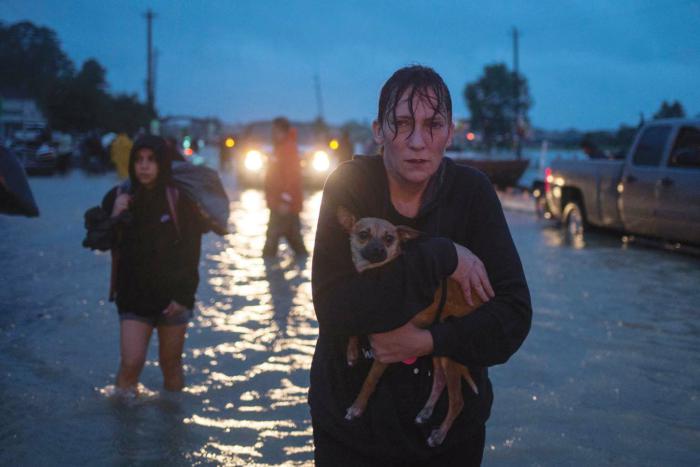 A woman holds her dog as she arrives to high ground after evacuating from her home because of floods caused by Tropical Storm Harvey Aug. 28 in Houston. CNS photo/Adrees Latif, Reuters

BRAINTREE -- Cardinal Seán P. O'Malley has authorized a special collection, to be taken the weekend of Sept. 9-10 in all parishes in the Archdiocese of Boston, in support of the relief efforts to those areas devastated by Hurricane Harvey.

The storm caused unprecedented flooding in southeastern Texas, leaving dozens confirmed dead and tens of thousands of people displaced. At press time, the tropical storm was still active, and was moving into Louisiana.

Funds collected in this one-time appeal will be used to support the humanitarian and recovery efforts of Catholic Charities USA, the official domestic relief of the U.S. Catholic Church, and will provide pastoral and rebuilding support to dioceses in those areas impacted by Hurricane Harvey.

Catholic Charities USA and their member agencies respond to immediate emergency needs for such necessities as shelter, clean water, food, and medical care as well as to the long term need to rebuild and recover after widespread destruction, and to the U.S. Conference of Catholic Bishops (USCCB) for pastoral and reconstruction needs of the Church. Dioceses throughout the country will be taking up similar collections during the first two weeks of September and all monies collected will be distributed by the USCCB to Catholic Charities USA.