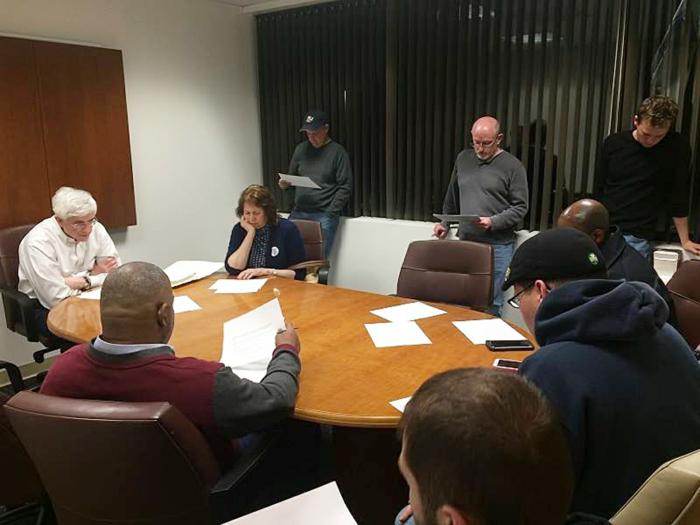 Participants take part in the class "The American Labor Relations System: Yesterday, Today, and Tomorrow" offered by the Labor Guild at the Archdiocese's Pastoral Center in May. Photo courtesy Labor Guild

BRAINTREE -- As Labor Day 2017 approaches, many see the middle class as shrinking, the wage gap increasing, and the cost of living on an upward curve. For Allyson Every, executive director of the Labor Guild, all of that only makes her organization more relevant than ever.

The Labor Guild, an agency of the Archdiocese of Boston, is celebrating its 65th anniversary of its School of Labor Management Relations. The school has provided education continuously since 1953, offering weekly classes to a range of people, including workers, business owners, and members of the labor movement.

The classes, taught by volunteer faculty that include arbitrators, attorneys, labor organizers, academics, and mediators, help to educate participants on the labor movement, unions, and other labor-related issues, and help bolster a variety of skills, including negotiation, arbitration, and leadership.

"We're trying to give people in our classes the knowledge and the confidence and the skills to make their lives better, (and to) make their coworkers lives better," said Every, speaking to The Pilot Aug. 28.

Surrounded by books, papers, and pamphlets, Every, seated in her office in the archdiocese's Braintree headquarters, noted that once there were labor schools across the country that offered such courses. Not anymore.

"Right now, the Guild is the only labor school in the country," she said. "There used to be over 200," but many of those have either been absorbed by unions or simply shut down.

It's too bad, she said, because "they don't teach this stuff in high school or college, unless you specifically go into a labor program and they are few and far between." While unions might provide education that training might be limited in scope, focusing on the industry union members are a part of.

In one of her positions prior to becoming executive director in 2012, Every served as the president of the Boston Globe's editorial and business union. She took courses at the Labor Guild, and found that the skills she learned in them immediately began to have a positive impact on her union work.

Education, like the type provided at the Labor Guild, can also be useful to the "rank and file worker," especially in a time of crisis or mistreatment in the workplace. An educated worker can become "influential," Every said.

That's important, said Every, because "currently, if you're a non-union employee, you can be fired for any reason, just about, unless it directly contradicts a state or federal law."

Meanwhile, if a union employee is not performing well on the job, a union might step in in an attempt to get to the root of the problem and fix it. If the employee can't fix the problem, "they go," she said.

At this time, "the vast majority of workers in this country aren't unionized," Every explained.

Nationally, only around one out of every 10 workers are unionized, and while those numbers are slightly higher in Massachusetts, it's still a far cry from only 60 or 70 years ago, when labor groups represented over 30 percent of workers.

In part, that drop is because companies are relying more and more heavily on technology instead of human labor, and workers are becoming more specialized as organizations become more compact.

Factory and industry jobs have first left the state, and then the country, helping to dissolve or limit the unions created to help protect the people who still work those jobs.

The falling number of unions can possibly be linked to a number of labor-related issues, including deaths on the job and falling wages, said Every.

"If you look at a chart, say from the 70s to current, and you see wages going down, it directly parallels the drop in union penetration," she noted.

It was in part unions, combined with public policy and tax policies, that "actually created the middle class," Every said.

The middle class is disappearing, she continued, and the division of wealth is becoming more prominent. The low number of unionized workers could be a cause.

A solution to these issues, then, she said, could be to increase the percentage unionized workers.

If that happens, "you're able to bring everybody up, so that you're able to, on one salary, have a house and two cars and a fishing camp or a cottage somewhere," said Every.

Every believes there is a "pent-up demand" for labor groups, and believes more will form in the coming years.

"We've trained well over 50,000 people in our time, people who have gone on to be active in every level of the labor movement, many of them have created their own businesses, many have gone into management," said Every.