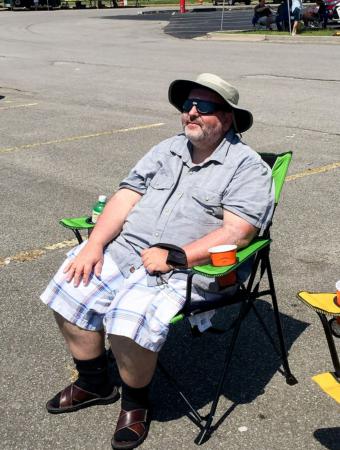 BRAINTREE -- For three days they traveled, driving a total of 1,352 miles from Massachusetts to their eventual destination of Athens, Tenn. Once there, they pulled into a parking lot, put down chairs, put on special sunglasses, and took out a pair of solar binoculars.

The original plan was to watch the eclipse in or around Colombia, S.C., where Father Soper, who besides being Secretary for Evangelization and Discipleship is also a trained astrophysicist, noted that the time of totality would be around two minutes and 30 seconds.

The plans abruptly changed after Father Soper saw that the forecast called for problematic weather in the area.

It took them an extra six hours to drive to Athens, and once there, they set up chairs in a parking lot, put on special NASA-approved eclipse viewing glasses, and watched the eclipse.

For Father Soper, the eclipse "was interesting up until the last few minutes before totality, then suddenly it became fascinating."

"Everything started to change -- it became markedly cooler, the light levels dropped quickly and it became like it was evening and then like it was late evening," he said.

Bishop O'Connell said he noticed that, in that moment, the birds stopped chirping and the insects that normally come out at night began to make noise.

In that moment of totality, the bishop said, "it goes from science to spiritual very fast. The world changes, the birds, the bugs, the people... it all happened in a flash."

"It is moving, it's a very moving thing. It moves you internally," he said.

It was that moment that really struck Bishop O'Connell, as for him, the "build up" involved too much science.

It was "all very interesting, cool science, but not exhilarating," he said.

"It was exhilarating to me!" he chimed in amid laughter. "I like the science!"

To Father Soper, it's that science, the ability to predict an eclipse that shows the spiritual side of the natural phenomenon.

"We know exactly when (an eclipse) is going to happen and we know a thousand years from now when they're going to be happening and a thousand years ago when they happened because the universe is rational... Things don't just pop out of nowhere," he said.

"God made the world rational, and he made it follow certain laws, and it does follow those laws," Father Soper continued.

In this way, God is like a good teacher, showing a student something exciting that he knows will "entice him to go deeper and deeper into the subject."

"A solar eclipse, in its wonderful predictability, is an enticing thing which can encourage us to go deeper into our exploration of the universe. And the deeper we go, the more we find both extraordinary complexity and underlying simplicity, both of which are facets of the mind of God, I think," he said.