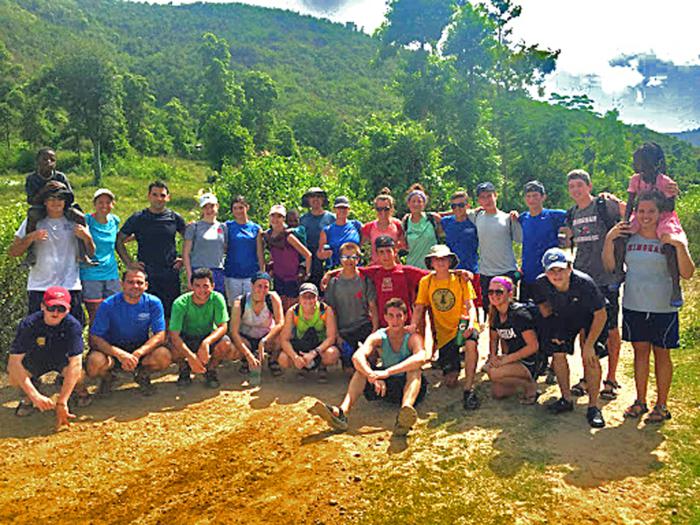 Seaside Life Teen Group in Haiti on their way to do a house visit. Pilot photo/courtesy Father Sinisa Ubiparipovic

BRAINTREE -- They stayed in an orphanage in the Haitian village of Duverger, and in the morning they prayed and at night they held adoration and traded life stories and bits of their separate cultures with the orphans. Many nights, the orphans fell asleep next to them.

Yet, it was during the day that the 19 teens and seven adult chaperones with Seaside Life Teen, a youth ministry of the Collaborative Parishes of St. Paul and Resurrection in Hingham, truly exemplified their Catholic faith.

During the first week of August, the Hingham group lived out the corporal and spiritual works of mercy in Haiti, tending to the sick and impoverished and aiding the elderly in the Haitian villages of Duverger and Dandann.

They worked through Haiti180, a non-profit mission started in 2002 by American Sean Forrest. The organization operates an orphanage, where the group stayed, a school, a church, and a home for the elderly. It's currently working on building a medical center as well.

Each morning, the group held an hour-long prayer service before spending time with the orphans.

"We were with the kids for a good amount of the trip," Katherine Stanwood, a senior at Thayer Academy in Braintree, told The Pilot after returning home.

She felt inspired by the kids, who, despite being orphans and coming from so little, "had so much energy" and always appeared to be happy.

Stanwood said she heard a staff member say the orphans are actually the lucky ones. In the orphanage, they receive care and food and a place to live and sleep -- luxuries that those who live in the villages are not always afforded.

After leaving the orphanage every morning, the group went to the villages, providing aid and assistance to those in need.

Father Sinisa Ubiparipovic, parochial vicar for the Hingham collaborative and one of the leaders of Seaside Life Teen, told The Pilot the group went on "house visits," before correcting himself.

"When I say house visits, I mean like hut visits," he said, describing how they saw families of six sometimes living in a hut around six ft. by 10 ft. large. At night, most of inhabitants of the huts simply sleep on the floor.

Every day, the group tended to Jean-Simon, a paralyzed man, who Father Ubiparipovic said "was like Jesus to us." They changed his bandages, as his body was covered in bedsores, and sang to him and prayed.

They also brought him the Eucharist every day, said Cassandra Dasco, a freshman at Hingham High School, who noticed that when they did, "he was so overwhelmed with happiness."

The group tended to others as well, singing and massaging the elderly and washing the feet of some of the villagers. Yet, for Boston College High School junior Christian Price, it was aiding an epileptic girl that stuck with him the most.

The girl was "disregarded by everybody," said Price, and when they met her, she was covered in burns from falling into the fire during her seizures. Every day, the group would go to her hut and help treat her wounds.

"Her and I connected on a level that you can't really connect in Boston with someone," Price said.

He plans to send letters and packages to Haiti180 with the hopes that they will be passed onto her.

Seeing the poverty the villagers lived in made Stanwood realize "how fortunate" she and her group members are.

Still, she said, the trip was "honestly one of the best experiences I've ever had."

"It was rewarding, and it opened my eyes to a whole different culture in a different part of the world that I've never really been to or experienced before."

Dasco and Price felt the same, with Dasco calling the experience "completely life-changing" and Price noting it was "one of the best weeks of my life."

None of the three teens had ever been on a mission trip to another country before, but each said they would likely do one again.

"All our kids have been deeply, profoundly impacted by the experience," he said.

"The faith of the Haitian people is just so incredible. When they sing at Mass, they sing, and everyone can hear them. They all know God is real," he continued.

"They have nothing and they are more joyful than we are here who have everything."