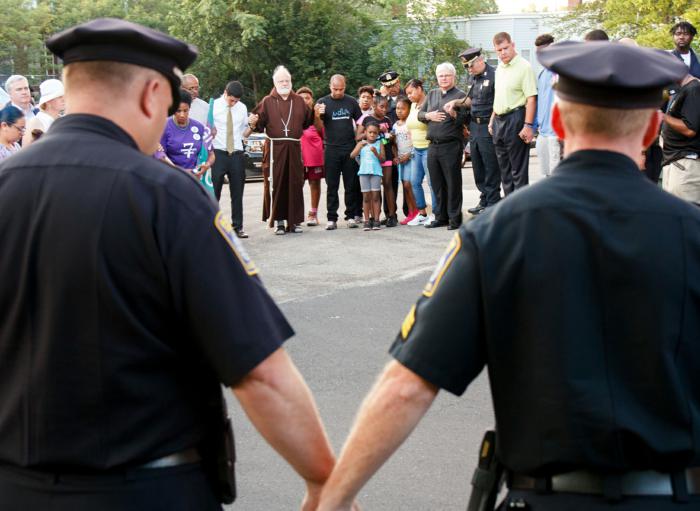 DORCHESTER -- The sun was just starting to set when the flashlights came on and chants of "Light up the streets, light up the night!" echoed across Dorchester's Bowdoin-Geneva neighborhood.

The chanting, coming from dozens of voices, caused residents to open their windows and their doors to peer out at the parade of civilians, police officers, and clergy members who made their way down the streets, shining flashlights on neighborhoods that have, especially in the last few weeks, seen some dark times.

Peace walks take place weekly in Dorchester, drawing together concerned residents who wish to stop violence in the area. They were started, in part, through efforts from local religious groups, including the Catholic Church, as well as efforts from Boston Mayor Marty Walsh and members of the community.

This walk was different, however, as it combined the Boston Police Department's annual Dorchester Flashlight Walk, which brings together community members and police officers.

Among those who walked on July 11 were Cardinal Seán P. O'Malley, Mayor Walsh, and Boston Police Commissioner Bill Evans.

"These walks are extremely important," said Mayor Walsh, speaking to The Pilot.

"St. Peter's Teen Center, the Catholic Church, Father Doc Conway, Father Jack Ahearn, and Father (John) Currie basically singlehandedly took this area over many years ago, began peace walks, began working on summer jobs, and they've turned the neighborhood that was violent and had a lot of activity into a relatively quiet neighborhood," he continued.

Since the start of the summer months, there has been an uptick in gun violence in Dorchester and other parts of the city.

"We need peace, and in our neighborhood, bad things (are) going on," said local Lina Gonzalez, one of the dozens who participated in the walk.

"Everyone is asking for peace, which we should have," she continued.

A number of those who participated in the July 11 walk had lost loved ones to street violence.

She started The Bobby Mendes Peace Legacy, an anti-violence initiative, after her son was killed.

"There is so much violence that is happening," she said, holding a flag that said "Forgiveness", "Peace", and "Justice" on it, next to a cross.

The walks "show people love and also tell them it is wrong to take life... They help us live a better life without violence," said Mendes.

Peace walks, organized by various groups, take part in other areas of the city, as well, as do the Boston Police Department's Flashlight Walks.

"What's great about this is we, the police department, and the clergy get to walk through the neighborhoods, talk to the neighbors, discuss what their issues and concerns are in a different atmosphere other than enforcement," said Police Captain Tim Connolly of District C-11 in Dorchester.

When responding to a crime scene, he said it can be difficult for residents to connect with him. This "lets us relax a little bit, talk in a different atmosphere."

"The message is peace. We all have the same goal, the goal is peace throughout the neighborhoods of Boston, especially Dorchester tonight, and I think that having those dialogues, walking around and people seeing us walking together sends a different message to the community -- one of hope, one of peace, and one of Boston's brighter futures," he continued.

The walk began and ended at Catholic Charities' Teen Center at St. Peter's, where the Boston Police Department handed out free ice cream.

A prayer, said by Father John Currie, pastor of the Dorchester Catholic Collaborative, opened the walk, while one said by Cardinal O'Malley closed it.

The walk is "an opportunity for the community to come together," said Cardinal O'Malley, speaking to The Pilot.

"Most people here have experienced in their own family, their own neighborhood, the loss of a loved one due to violence, and this is an opportunity to realize people are not alone, that we are working together to bring about a deeper sense of community. People feel responsible for each other, and they'll work for peace and solidarity in this community," he said.