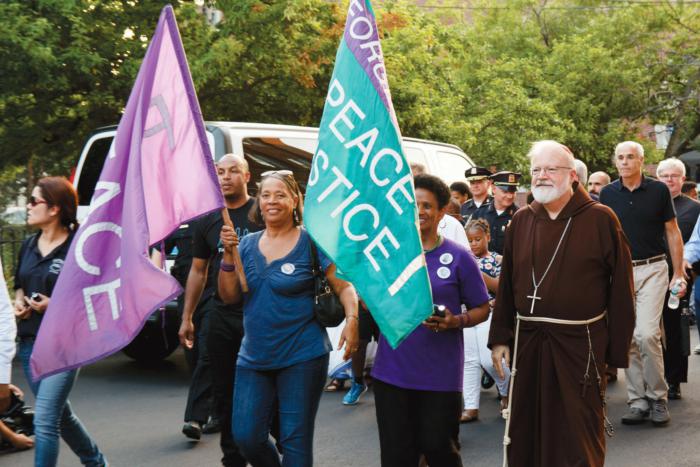 'On Tuesday evening (7/11) I joined Mayor Walsh, Boston Police Commissioner Evans and a number of local faith leaders in a walk for peace in Dorchester.' Pilot photo/Mark Labbe

First, on Saturday (7/8) the archdiocese organized a rally for Hispanic youth at Fontbonne Academy in Milton. We had about 450 young people with us there. The kids all looked wonderful in their blue T-shirts that said "Atrevete a Navegar Contracorriente" ("Daring to Swim Against the Current") and had the symbol of the fish, which of course in the Early Church was the symbol of the Christian because it comes from the acrostic of the Greek words "Jesus Christ, Son of God, Savior."

The program began in the afternoon with a Mass, which I celebrated. Then, following dinner, there was a play and other activities put on by the young people themselves and a witness talk by Azeneth Gonzalez, a Catholic musician and speaker from Mexico. And then the evening concluded with a eucharistic holy hour.

It was a wonderful experience. I was very pleased to have so many of our Hispanic young people join us particularly in light of two upcoming events: the Synod on Youth, Faith and Vocational Discernment and also the V Encuentro, which is going to focus very much on young Hispanics and second-generation immigrants. So, this was a wonderful preface for those events with the Hispanic community in our archdiocese.

Then, on Tuesday evening (7/11) I joined Mayor Walsh, Boston Police Commissioner Evans and a number of local faith leaders in a walk for peace in Dorchester. Along with a large group of residents, with us were Father John Currie, Father Jack Ahern, Father Doc Conway, Father John Connolly, Father Kevin O'Leary, Sisters of the Missionaries of Charity, Paulo De Barros of the Teen Center at St. Peter's, as well as a number of deacons, religious, Protestant pastors and local religious leaders. There were also many police officers marching with the people, underscoring the importance of working together with the police.

The walk began at Catholic Charities' Teen Center at St. Peter's with a prayer led by Father Currie. It was a very moving experience because many people on the walk had lost children or loved ones to violence in the streets of that neighborhood. There was also a call to turn in all the guns and other weapons that have caused such pain-and-suffering in the community. It was a very important witness on the part of the community.

Also this week I want to mention that, in light of the plan to convert St. John the Baptist in Salem, the Polish parish in the city, into a Shrine of Divine Mercy with a special emphasis on Pope St. John Paul II, I will be giving them the relic of Pope John Paul II that Cardinal Dziwisz gave to us following the beatification of the Holy Father.

In today's world where shrines are taking on such importance, we hope the presence of this new shrine will prompt people who are disconnected from the parish and the life of the Church to go and seek contact with the Church and the sacraments through a pilgrimage experience. And we know that the theme of mercy is very resonant with people. For example, we saw what a wonderful impact the Year of Mercy has made in the Church, and the devotion of Divine Mercy that was so strongly promoted by Pope John Paul II has been a very important part of many people's devotional life. So, we are very enthused about this new shrine, and I know the people in Salem are working very hard to make it a success.