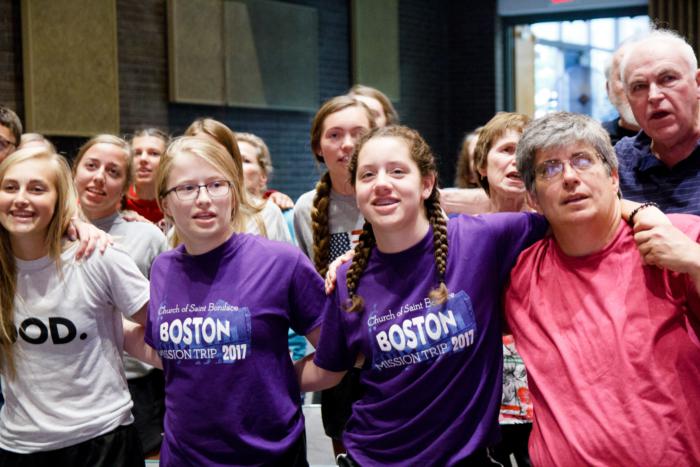 EVERETT -- Saugus senior citizen Ken Nadeau sounded emotional as he addressed the hundreds people gathered in the auditorium of Pope John XXIII High School in Everett, June 29. He was on stage thanking the young adults who had cleaned his entire house and did yardwork as part of the Catholic Heart Workcamp service program, during the camp's Resident Night.

"They came in as stranger, but they left as friends," said Nadeau. "I really felt good about myself when they left, and I haven't had that feeling in many years."

These people are special... because they are under the spirit of God and are only going to do the right thing," he said.

Nadeau was just one of many senior citizens who were aided by the participants of this year's Boston area Catholic Heart Workcamp, held June 25 to July 1, which saw around 250 youth, young adults, and adult leaders travel to the Boston area from 11 different Catholic parishes across the U.S. to take part in service opportunities and strengthen their faith.

During their time in the area, the "campers" used Pope John XXIII High School as a sort of home base; sleeping, eating, and taking part in faith-based activities there while not helping out at a worksite.

Yet, it was the service opportunities that took up much of the campers' time.

A national and international program, Catholic Heart Workcamp annually sees thousands of campers take part in weeklong Catholic Mission trips across the U.S. and beyond. Two are held each year in Massachusetts -- one in the Boston area, and one in the Groton area.

Despite the range of the program, each mission trip follows about the same schedule: Each day, after breakfast, campers attend a morning Mass before leaving home base and heading to a worksite, where they stay until midafternoon. After that, it's back to home base, where the evening program, consisting of prayer, reflection, dinner, and time for fun activities, plays out.

Lights out is around 11 p.m., and wake-up time is a little after 6 a.m. In the Boston area camp, participants slept on air mattresses and sleeping bags in the classrooms of the high school.

It's a busy week, said Scott Morin, manager of the Boston area camp, but campers can't say they aren't entertained.

"Kids don't come here and say I'm bored at all. It's not boring to love Jesus or to be loved by Jesus," Morin told The Pilot, June 27.

"They're living (the Gospel). They're learning it, they're feeling it, and they're sharing it. It's really a head, heart, and hands process all week," he continued.

The service portion of this year's camp was focused on aiding senior citizens, Morin said, explaining that the camp coordinated with senior centers to find people who needed a project to be completed. Morin, along with fellow manager Christina Pappalardo, would then interview interested seniors before assigning young campers and adult leaders to assist them.

Projects ranged from relatively small tasks, such as doing simple yardwork, to much larger projects, like building a shed or repainting a house. A special group of "Troubleshooters," or people familiar with construction work, taught campers how to correctly, and safely, complete some of the larger jobs.

During Resident Night, people like Ken Nadeau, who had been assisted by campers in some way took time to thank them for their help, and offer testimonials to Catholic Heart Workcamp.

"I'm so glad I found out about this program," said Joan Walton of Saugus during Resident Night.

Campers had cleaned her windows, inside and out, and had painted a room, and "I couldn't ask for anything to be better than this," she said.

"These were the most special people that have ever come into my life."

Ruth Berg, also of Saugus, read from over a page of prepared statements. She recalled how, days earlier, after she instructed the seven teenagers and one supervisor who appeared at her door on what she wanted to have done, they "plunged into action and never took a break."

"As soon as one finished their chore, they immediately would look for something else... Everyone was so pleasant and accommodating."

"It is encouraging to know that children of this caliber will be inheriting our world," she said.

For first-year camper Kiera Russo, a teenager from New Canaan, Connecticut, helping others isn't just a nice thing to do, it's a "responsibility," she said.

"If you have the resources and opportunity to help one another, then we are called to do that. And having that fulfillment and that joy is such pleasure and working with these people is just such a pleasure and I'm really grateful to be part of this," she told The Pilot following Resident Night.

She said she's grateful, too, that she was able to learn some new skills, like painting and landscaping, calling her newfound knowledge a "bonus" of the trip.

Now I can go home and apply that to my own house and maybe teach my brothers, too," she said. "That will be really fun and interesting!"

Gabe Devore, a teenager from Erie, Pennsylvania, said this is his third year attending one of the Catholic Heart Workcamp mission trips -- the first was in Virginia, the second in North Carolina.

"Everyone here is so friendly, it's almost like it's a totally different planet," he said.