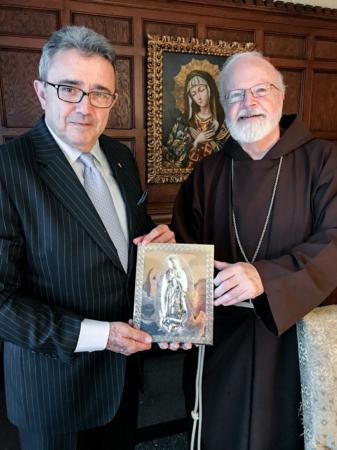 'Last Friday (6/16) I was visited by the Mexican Consul General in Boston, Emilio Rabasa.' Pilot photo/CardinalSeansBlog.org

Last Friday (6/16) I was visited by the Mexican Consul General in Boston, Emilio Rabasa. He presented me with a very beautiful silver image of Our Lady of Guadalupe that his 90-year-old mother sent him to give to me!

We discussed a number of issues during our visit including the fact that he and the other Mexican consuls in the United States (there are 50 Mexican consulates in the U.S.) are very much engaged with the immigrant population and very concerned about the present situation of deportation and lack of clarity in immigration policy. It was a very interesting meeting, and he assured me he is very anxious to work with the Church in whatever way possible.

Saturday (6/17) I went to St. Tarcisius Parish in Framingham to celebrate confirmations for the Brazilian Apostolate in the archdiocese. As I have mentioned previously, because we could not have the confirmations at the cathedral this year and the numbers are so large, the confirmations were divided into three different groups. This was the last of the three Masses.

We were joined by Sister Elisete Signor as well a number of the Brazilian priests working in ministry throughout the archdiocese. As always, it was a very joyful celebration and there was great music, enthusiasm and participation by the people.

Then, on Sunday (6/18), I went to St. Monica in Methuen to celebrate the Mass for the 100th anniversary of their parish. We were joined for the Mass by Bishop Kennedy who had served in the parish early in his priesthood. In fact, he told us that he was present for the 50th anniversary of the parish, and I told him we expect him to come for the 150th anniversary! Also with us were former pastor Msgr. Bill Fay as well as, of course, the present pastor Father Bill Lohan, parochial vicar Father John Cassani and Sister Suzanne Fondini, who is the principal of St. Monica School.

It was a very beautiful celebration and I was able to greet the parishioners after the Mass. They had mentioned that I had an operation on my knee last week, so I would say a full 20 percent of the congregation felt obliged to tell me about their knee problems as they were leaving!

At the beginning of each summer, we like to hold a retreat for all our seminarians studying at different seminaries. It's a very nice way to give the seminarians an opportunity to have a time of rest to begin their summer as well as to allow our men who are studying at different seminaries to get to know each other a little better. In recent years, we've been holding the retreat at the Franciscan Guesthouse in Kennebunkport, Maine and on Monday (6/19) afternoon I went to celebrate Mass with them and join them for lunch.

They were about to head out on their fishing trip. Last year several seminarians had become seasick, so I told them this year's trip would help separate the men from the boys! While I was there, I was also able to greet the Lithuanian Franciscans who run the House, and I was particularly pleased to be able to say hello to Bishop Paul Baltakis who is living there in his retirement.