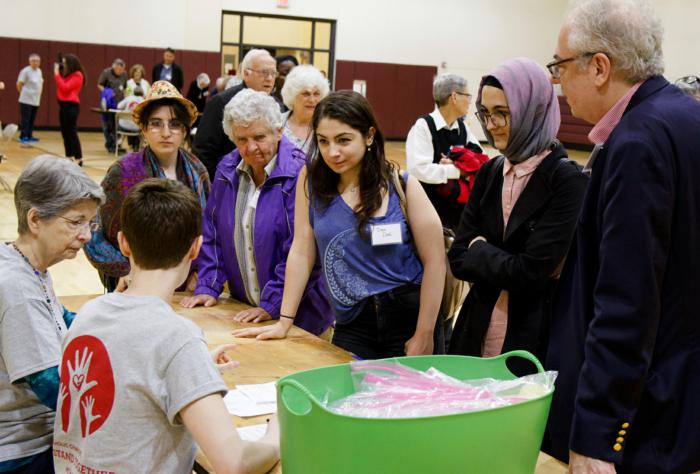 BOSTON -- Many people looked confused, and some a little frustrated, as they wandered from station to station during Catholic Charities of the Archdiocese of Boston's "In a Refugee's Shoes" interactive simulation. But, organizers said, that was exactly what was supposed to happen.

The simulation, taking place in Boston College High School's gymnasium, June 17, was held as part of Catholic Charities' Standing with Refugees event, which also included a panel discussion on refugees. The event was held in celebration of World Refugee Day, June 20.

Dozens of people attended the discussion as well as the simulation, which was meant to guide participants through a refugee's experience in trying to attain access into the United States.

To start the simulation, participants were first broken up into "families," with people being assigned characters with a variety of backstories and reasons why they fled their home country and were now looking to enter the United States.

Families then had to fill out paperwork explaining these reasons. Written and oral instructions were given in Spanish, a language some were familiar with, but most didn't speak fluently. Organizers said this was to simulate the confusion refugees might face dealing with English.

Next, families had to work their way through a litany of stations, all designed to mirror the real-life steps refugees might have to take before entering the country. One was set up like a school, where families had to learn simple words in Italian or Spanish before taking a test on those words. Another was set up like a doctor's office, where families learned they might have a certain contagious disease that would prevent them from entering the country. They were given "medicine" and told to wait several minutes, meant to signify days or weeks, before returning to the "doctor," hopefully cured.

There was also a station to obtain food, as well as a detention center, where some families were placed for reasons not well explained and told to wait for unspecified amounts of time.

At the end of it all, after all the stations were completed, the families were brought to the UNHRC, the U.N. Refugee Agency, to find out if they could gain access into the country. Yet, despite completing all of the stations, the participants were ultimately denied.

"We wanted to really give people the real sense of what it was like to be a refugee, to really have them understand their journey, and it doesn't take one year for them to get here, It doesn't take two years, it takes maybe even up to 10 years," said Catholic Charities' Sandra Pittenger, who first proposed the simulation, basing it partially on a program of Catholic Charities of Louisiana.

"We didn't want to make it easy. We didn't want them to go through and get from station to station and finally make it to the UNHCR. We wanted them to possibly make it to the UNHCR, and if they did, maybe they're approved, maybe they're not approved," she said."All of the stations represented real world things refugee families might have to go through to gain access into the United States. It's not a simple process, and the simulation was meant to get participants thinking about that," she said.

While Pittenger noted that participants seemed to enjoy the simulations and have fun in the process, "I think deep down they truly did get the message when they were leaving, because they thought they would just make it at the end, but then when they got a denial, and there was a reason behind the denial, they were like 'Oh, what do I do now?'"

For Marie Casey, one of the participants, the simulation was a "wake-up call."

"I didn't have the accurate information as to what really goes on when someone is a refugee trying to come here. I didn't realize the process is so difficult," she said.

"Then, after all these hoops you have to jump through... they go 'Sorry, you're denied,'" she continued.