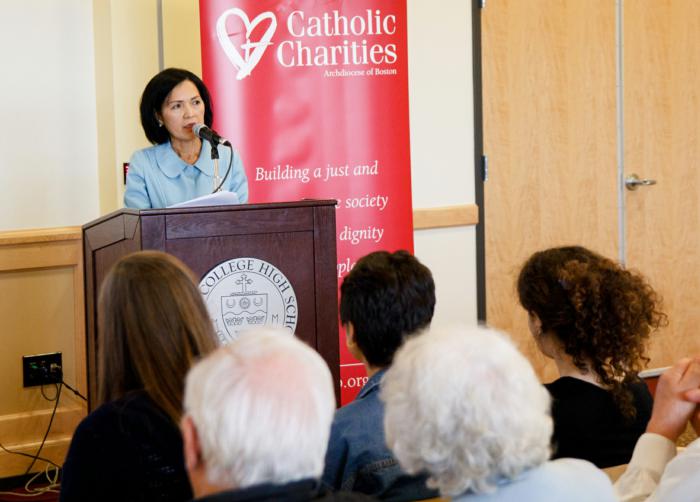 Mary Truong, executive director of the Massachusetts Office for Refugees and Immigrants speaks at the Catholic Charities panel discussion on the plight of refugees June 17. Pilot photo/Mark Labbe

BOSTON -- Experts on immigration and refugees spoke on whether welcoming refugees is still an American value during a panel discussion held at Boston College High School, June 17, and hosted by Catholic Charities of the Archdiocese of Boston.

The panel, as well as an interactive simulation that gave participants a taste of what it's like for a refugee to apply to enter the country, were held in celebration of the internationally recognized World Refugee Day, June 20.

Panelists for the event included Dr. Westy Egmont, director of the Immigrant Integration Lab at Boston College; Msgr. Robert Vitillo, secretary general of the International Catholic Migration Commission (ICMC); and Mary Truong, executive director of the Massachusetts Office for Refugees and Immigrants (ORI). Marjean Perhot, director of Catholic Charities Refugee and Immigration Services, spoke as well, and introduced each of the panelists.

"Globally, we are in a refugee crisis that parallels that after World War II. Nationally, we're in danger of turning our back on the world's most vulnerable and reducing the refugee program to rubble," said Perhot.

"We hope that today's event will help you understand the challenges facing refugees, and how fortunate we are to be in a position to make a difference in the lives of our brothers and sisters across the globe," she said.

Egmont spoke first, and offered a litany of facts and figures on the refugee crisis around the world. He spoke of the ongoing crises in South Sudan, Syria, and Afghanistan -- how in each case, people by the millions have fled and continue to flee their home country due to untenable living conditions.

There are 65.3 million displaced people from around the world, he said, with only 21 million of them classified as refugees. The United States takes in only a very small percentage of those people, and its efforts pale in comparison to those made by other countries.

So, he said, "It depends on people like you and me to be involved."

"Do we not owe people enough humanity to stand with them when they plead for their lives? We do, we do. And we will," said Egmont.

In his talk, Msgr. Vitillo detailed the work of ICMC to assist relocated refugees from around the globe.

Partnered with organizations around the world, including the Office of the United Nations High Commissioner for Refugees (UNHCR), ICMC is an international, non-profit organization that strives to protect and serve uprooted people around the world through a myriad of ways, from providing them with basic goods, healthcare, and education, to offering legal assistance and a safe place to live.

ICMC works with the U.S. government to process applications of refugees in "more vulnerable" situations. The process can take anywhere from two to 10 years, Msgr. Vitillo said, and "in the meantime people need to really struggle for survival."

Some are still living in their home countries, and others work under the table to be able to provide for their families, as they don't have permission to work legally, he said.

He recalled an ICMC resettlement center in Turkey, where children were going through a cultural orientation process. He saw that they were coloring maps of the U.S., giving a special color to the state that they would be travelling to.

"Now, behind their eyes, I could see a lot of pain. These are children who witnessed the murder of their relatives," said Msgr. Vitillo.

"They had to run away, sometimes during the night without anything with them, to be able to flee for safety. They were now living in another country that had received them but also didn't have a whole lot of resources or maybe even the will to receive them with great welcome."

Speaking last, Truong, a refugee herself, recounted fleeing her home country of South Vietnam on April 30, 1975 -- the day the country surrendered to North Vietnam.

On that day, she, her eight siblings, her father, and her grandmother all climbed into the family station wagon and started to drive down to the ocean, where they thought they would find a way to escape the country.

The roads were filled with other cars, she remembered, and the drive soon devolved in chaos.

"We saw a helicopter crash on top of a school bus. No one stopped to help," she said, recalling that she also saw people shooting and trying to clear a path through the cars.

"It was very scary for us to see people getting killed and blood everywhere like that."

Still, her family did make it out of the country that day, and were brought to a U.S. base in the Philippines before being transferred to a refugee camp in Pennsylvania.

Eventually, at the insistence of a family friend in the area, the family moved to Boston, and Truong and her siblings attended school and worked to support the family.

Through their hard work, she and her siblings all attained higher education degrees.

"So, we achieved the American dream," she said.

Serving on a number of non-profit boards in addition to acting as executive director of the Massachusetts Office for Refugees and Immigrants, which resettles 2,400 refugees a year, Truong said she is "very grateful" to those who have helped her achieve so much, and feels that she is able to contribute something back through her work.

"Many of us (refugees) are trying our best to help out the community," she said.