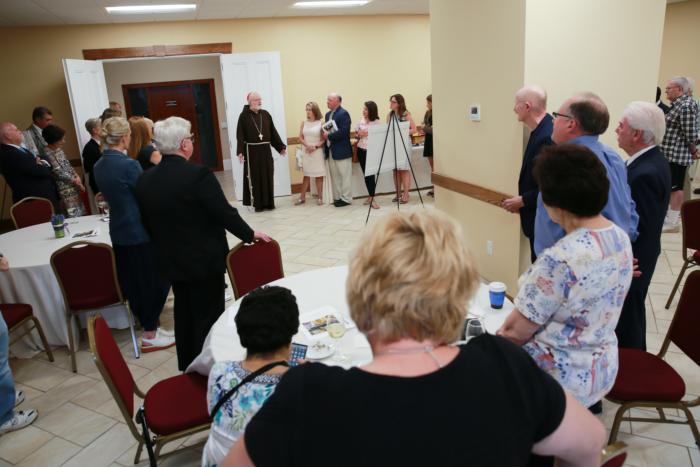 'So, that evening, I attended the reception we held at the Cathedral to raise awareness about our planned renovations.' Pilot photo/CardinalSeansBlog.org

Like the rest of the American public, I was shocked by the terrible shooting that took place earlier this week in Arlington, Virginia, where a group of Republican Congressmen were practicing for a charity baseball game against a team of their Democratic colleagues -- just the type of social interaction we need to see more of in our Congress, which has become so polarized and paralyzed by partisan differences.

Tragically, an obviously very disturbed person who was unhappy with the current political situation chose to try to harm those Congressmen as they were innocently practicing. We know that if not for the heroism of the Capitol Police who were present, this tragedy could have been significantly worse.

This event certainly underscores the danger of the violent rhetoric and the atmosphere of polarization and intolerance for others' opinions that can lead people to demonize others and to even commit violence. It calls into question, too, our country's tolerance for making weapons so available to the general population without careful screening and background checks.

We want Congressman Steve Scalise and the three others injured in the attack to know that we are praying for them and their complete and speedy recovery.

Last Friday (6/9) I went in for a short procedure on my knee at St. Elizabeth's Hospital, where the doctors and nurses were all so gracious and provided me with wonderful care.

It was a minor procedure and everything went wonderfully but, unfortunately, it necessitated me staying off my feet for a couple of days. So, I was unable to participate in a number of wonderful archdiocesan events that I was scheduled to attend. However, I followed them as closely as I could and would like to share some of the details of them with you.

...on Thursday (6/8), there was a dinner sponsored by the Cardinal Cushing Centers to support the work at their wonderful facility in Hanover that cares for young people with special needs. At the dinner, they honored the Franciscan Sisters who were the founders and the present sponsors of the Cushing Centers, formerly known as the St. Coletta Center.

It was renamed in honor of Cardinal Cushing who was very much involved in the foundation of the center and who had such a special commitment to special needs children. In fact, he is buried on the grounds of the Cushing Centers in a very beautiful replica of the Chapel of the Portiuncula in Assisi.

Then, on Sunday (6/11), we had a first Mass at the cathedral of Brother Will Terrazza, who is a Capuchin Friar who served his diaconate year at the cathedral. We are blessed that Jesuits, Capuchins and other religious communities that have their men studying here in Boston send their deacons to work in our parishes for their diaconate year. Of course, as a Capuchin, I was very pleased to have Brother Will working here in our cathedral parish. Because of Brother Will's knowledge of Spanish, he was a great help at the cathedral, and now that he's been ordained a priest he will be working in New York.

By Wednesday (6/14), I was out and about again and ready to resume my schedule. So, that evening, I attended the reception we held at the cathedral to raise awareness about our planned renovations. At the reception we showed a video, which I like very much, highlighting the great history of the cathedral and plans for its future.