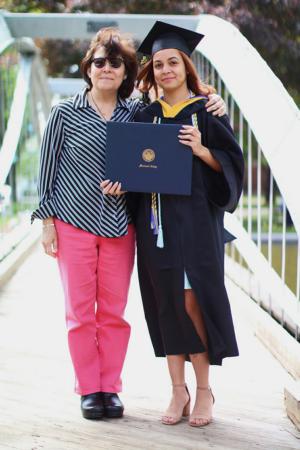 Until the 6th grade, Mercado lived in the Dominican Republic with her mother, brother, and sister, while her father was already living and working in the U.S.

"He would occasionally visit my family in (Dominican Republic) and would send money over there to support us, but during my childhood he was living here," she said.

She attended a Catholic school in the Dominican Republic, and later continued her Catholic education in the U.S. at Notre Dame Cristo Rey High School, a co-education school sponsored by the Sisters of Notre Dame de Namur.

It was there that she learned more of the ins and outs of the English language, taking a class aimed at non-native speakers that saw her "reviewing basic English skills."

That helped "prepare me for the materials in the following years," said Mercado.

With the necessary skills, and with hard work, "I got into honor classes and my GPA went up, and I just kept going on until my senior year."

While she did well in high school and planned to attend a four-year college upon graduating, due partially to financial reasons, she instead chose to attend Northern Essex Community College in Lawrence. She said it was a decision that tested her faith.

"I kind of lost faith, there," she said of attending the school. "I questioned myself and I questioned God."

Yet, "in the end, God had a plan for me, which was to go to a two-year college, get prepared, then transfer to a four-year college and achieve my goals," she added.

"At the end of the day I think my faith got stronger because I feel like I'm now closer to God."

Now, she works at the Lawrence Early Achievement Partnership (LEAP), where she works with pre-school students.

She's been offered a Kindergarten fellow position at Community Day Arlington School in Lawrence, and will start there in August.

"It doesn't matter where you're coming from, as long as you work very hard for it and you stay focused on your goals you will definitely achieve them," she said.

Mercado's story is one that the Archdiocese of Boston Catholic Schools Office hopes to see often repeated.

"Their stories are seeds ready to be sown; we (Catholics) are the earth that would help them to germinate and become inspiring stories-- or not," she continued.

Mercado worked as her assistant for a time while she was a student at the school, and said she learned much from Sister Barbara.

Sister Barbara "helped me tremendously," said Mercado, noting that she taught her computer skills and receptionist skills, among other things.

"She helped me more than you could ever imagine," she said.

Sister Barbara later attended Mercado's graduation ceremony from Merrimack College, after Mercado presented her with one of her four tickets to the graduation.

"I do have siblings, however, I felt that this was a very important event in my life, and I wanted people that helped me achieve that to be there," said Mercado.

For Sister Barbara, "that was one of my best presents."