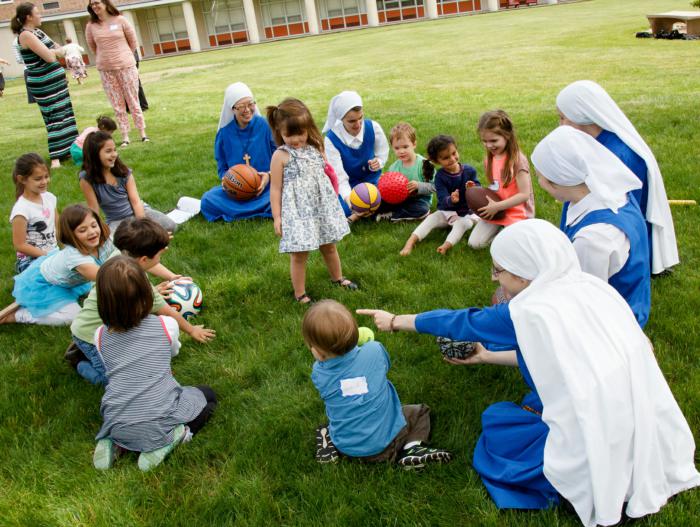 Sisters of the Daughters of Mary of Nazareth play a game with children at the 11th annual Homeschooler Vocation Day held at Pope St. John XXIII Seminary in Weston June 1. Pilot photo/Mark Labbe

Held through efforts by the archdiocese's Home School Ministry and the Office for Vocations, Homeschooler Vocation Day serves as a way for Catholic homeschooling families from across the archdiocese and beyond to come together and celebrate their shared faith and method of education.

Daughters of St. Paul and Daughters of Mary of Nazareth, as well as seminarians and several priests were also present at the event, giving families an opportunity to interact with religious and clergy in a relaxed setting.

The day began with a Mass celebrated by assistant vocation director Father Carlos D. Suarez, with Father Sinisa Ubiparipovic, parochial vicar at St. Paul in Hingham, as the homilist, before families were treated to a lunch.

Homeschoolers were then invited to participate in one of three vocation talks. Boys attended a talk by seminarians, while religious sisters led talks to two groups of girls, broken up by age.

The groups later converged outside, where parents chatted as children played games and interacted with the sisters, seminarians, and priests.

"I think it's great that our kids can know that there are seminarians and sisters out there who are regular people," said Jennifer Kearn, a mother of four and a parishioner at St. Andrew Parish in Billerica.

"It's nice to be able to be exposed to the religious life and have them see that's its normal," she continued.

Kearns homeschools all of her children, whose ages range from two to nine and a half.

"The older kids help teach the younger kids," she said. "It's kind of like the one room schoolhouse ... everyone hears what's going on and everybody learns."

It's the second year she and her children have attended the Homeschooler Vocation Day, and she noted that "we really appreciate the Mass and having families around with us for the Mass."

"The support of the diocese is really good for us. They know that we're trying to raise our kids well as good Catholics and that we have their support is really meaningful."

The Home School Ministry, said Father Ed Riley, spiritual director and liaison for homeschooling families, "has been primarily to assist Catholic families with the spiritual and sacramental life of their children."

One of the activities that the ministry sponsors is a monthly children's Holy Hour at St. Anthony Parish in Allston, something that Molly Bergman, another homeschooling parent of four, appreciates.

The Holy Hour "helps the children come to know God and adore Christ," she said, noting that Father Riley is "always available for advice."

Bergman and her family, parishioners of St. Agnes Parish in Arlington, started homeschooling three years ago, "in part in reaction to what we felt was lacking in the brick and mortar schools, and also we wanted more control over the curriculum and also we wanted to bring our family closer together."

"It's fulfilled those things. It's been really a wonderful gift," she said.

Her 12-year-old daughter Erin, the oldest of her children, said she likes being homeschooled "much better than going to normal school."

"I get to spend more time with my family and my brothers and sisters," she said.

She said she has gone to the event before, and felt "inspired" by this year's vocation talk.

"I met a lot of friends and new people," she explained.

There are about 100 homeschooling families that Father Riley is in contact with through the homeschooling ministry, he said, explaining that there are "hundreds more that I don't know."

There is also an active homeschooling community, called Catholic Homeschooler in Massachusetts East (CHIME), which encompasses families who primarily live in eastern Massachusetts. The group organizes trips, academic and spiritual activities, classes, and clubs for its member families, and a number of families who attended the Homeschooler Vocation Day are part of that group.

There are "a lot of good friends here," said Molly Bergman, looking around at the other families playing outside.