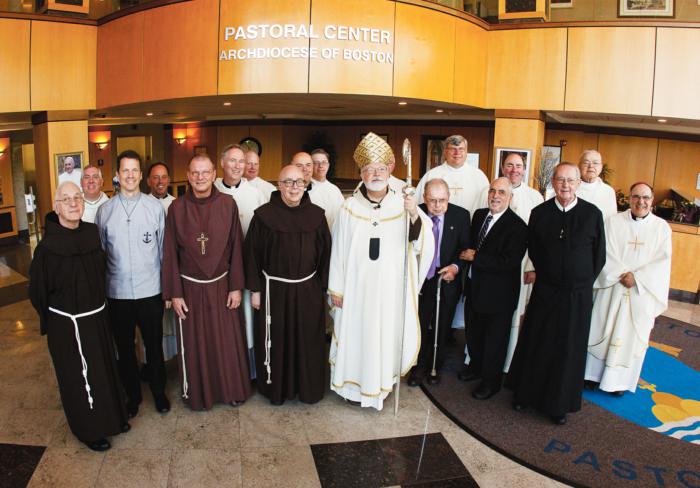 'I returned to the archdiocese early this week and on Wednesday (5/17) we celebrated the Mass for priests celebrating their 25th Jubilee as well as religious brothers celebrating jubilees from 25 years to as much as 60 years of religious life.' Pilot photo/CardinalSeansBlog.org

I want to begin this week by noting the passing of Bishop Thomas Daily. Though a sad occasion, I was pleased to attend the services in Brooklyn.

In addition to being the former Bishop of Brooklyn he was also a priest of the Archdiocese of Boston and was a member of the St. James society who served in Latin America. Of course, he also served as an auxiliary bishop here and as vicar general.

...He is from a family that has given three fine priests to the Archdiocese of Boston -- Bishop Daily, his brother Father Vin Daily and his nephew, Father Vincent Daily.We want to extend our condolences to them and to his many relatives and friends who are mourning his passing and assure all of them of our prayers for him.

As I mentioned in my last post, this past Saturday (5/13) was the Centennial anniversary of the apparitions of Our Lady of Fatima, and I was so happy to be able to be in Fatima for the celebrations with the Holy Father. It was also the occasion for the canonization of two of the visionary children of Fatima -- St. Francisco Marto and his sister, St. Jacinta Marto. There was great enthusiasm among the many hundreds of thousands of pilgrims gathered there.

Among them were pilgrims from Boston, including a group from the Cape Verdean community of St. Patrick's in Roxbury, a group from St. Anthony's in Cambridge accompanied by their pastor Father Walter Carreiro, as well as Father Darin Colarusso.

The Holy Father arrived on Friday evening and conducted a prayer service and presided over the rosary, which was followed by the candlelight procession with hundreds of thousands of people.

We also celebrated a Mass, which began at 10 p.m. and ended at midnight, which was celebrated by the Vatican Secretary of State Cardinal Pietro Parolin.

The following morning, the Holy Father himself celebrated the Mass of canonization of the new saints.

...Present at the Mass was the little boy from Brazil who experienced the miracle that led to the canonization. During the offertory procession he came up with his parents and sister, and he gave the Holy Father a big hug. It was a very touching moment!

I heard an interview with his father on Portuguese television, in which he explained that his son had a terrible accident and was essentially given up for dead. The doctors said he had practically no chance for survival and, if he did survive, he would have terrible, permanent brain damage. The father said he prayed to the children of Fatima for his son because they themselves were children and, as we saw at the canonization, he has made a complete recovery.

It was very beautiful that the miracle was received by a child because that is one of the most important aspects of this canonization -- it shows the importance of children and their call to holiness. It also underlies the importance for the adult members of the community to transmit the faith to new generations of disciples.

I returned to the archdiocese early this week and on Wednesday (5/17) we celebrated the Mass for priests celebrating their 25th Jubilee as well as religious brothers celebrating jubilees from 25 years to as much as 60 years of religious life.