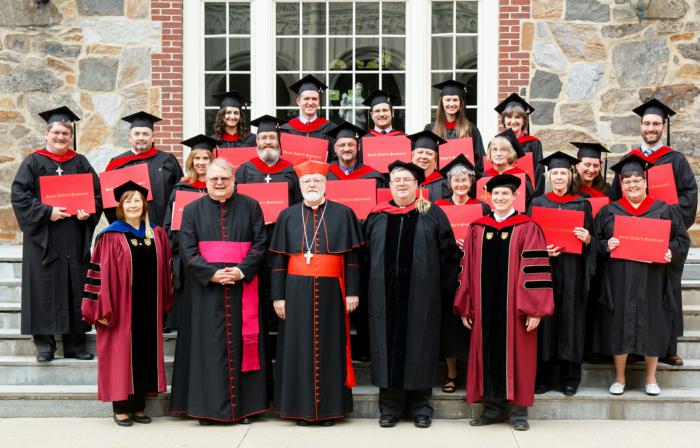 The 17 graduates of the Theological Institute for The New Evangelization are pictured with Cardinal O'Malley and officials and staff of St. John's Seminary following their May 23 commencement ceremony. Pilot photo/Mark Labbe

BRIGHTON -- The smiling face of 17 graduates of the Theological Institute for The New Evangelization shone brightly from under black graduation caps as they, together with friends and family, gathered at St. John's Seminary in Brighton for the 2017 commencement ceremony May 23.

The commencement address was given by Christa Klein, former president of the In Trust Center for Theological Schools and a consultant for theological schools, who is also a newly appointed trustee of St. John's Seminary.

She commended the "deeply inspiring" goals of the graduates, and praised the "burning heart" that likely led them to choose to study at the Theological Institute.

"I suspect that you know well the burning heart in your own studies, and have glimpsed the new reality more fully in the breaking of the bread in your own parishes and here, in St. John's," she said.

Use what you have learned as an "instrument of hearing and respecting the needs of others and discover how they can, in mind and heart, know the love of Christ," she said.

Klein spoke about change in Catholic institutions, noting that although aspects of the Church are constantly reorganizing and shifting, tradition still must be drawn upon "for renewed and reorganized religions to remain faithful."

It is important to remember, as you take on new paths in life, that "you are not God," she said, and cannot "surmise unintended consequences."

You must "check your pride," she told the graduates, and remember that teamwork is important.

Eric Landers served as the student speaker, and in his speech he thanked the staff of the Theological Institute and acknowledged all the work himself and his fellow classmates completed over the years.

"We've taken precious time away from our families, from our home lives, from our work lives," and from other things we value as from 'so that the Lord may fully reveal himself.'"

It is important to remember that while we completed our studies, we must guard ourselves against "keeping (God) at a distance or contenting ourselves with the progress we've made."

The Institute "has certainly been a grace in our lives," he said. "I'm sure my classmates would agree that it has been a source of true conciliation."

In spite of "the energy that has drained from me" while completing my studies, "it has left me refreshed, motivated" to spread the Gospel, said Landers.

Speaking to The Pilot, Brother John McCabe said it had taken him around seven years to earn his degree, as his commitments allowed him to take one class at a time, but said it was a "great process, just learning more and more about the faith."

Currently working part-time in ministry at Northeastern University, Brother John said he will be travelling to Florida this summer to take on a full-time role in campus ministry at the University of Central Florida.

"I look forward to bringing (my degree) out to ministry," he said.

Graduate Christine Coffey Donahue called her three and a half years with the Theological Institute "a wonderful experience and one of the best of my life."

"By the grace of God we all finished our studies and we grew academically and formationally and spiritually and pastorally and we couldn't have done it without the support of our faculty and our friends," she said.

She plans to work in prison ministry, and currently volunteers at the federal penitentiary in Devens.

"It's very humbling to be able to go and be a witness to Christ and meet the men and try to help them," she said of the prisoners. "It's a mutual respect we have for each other."