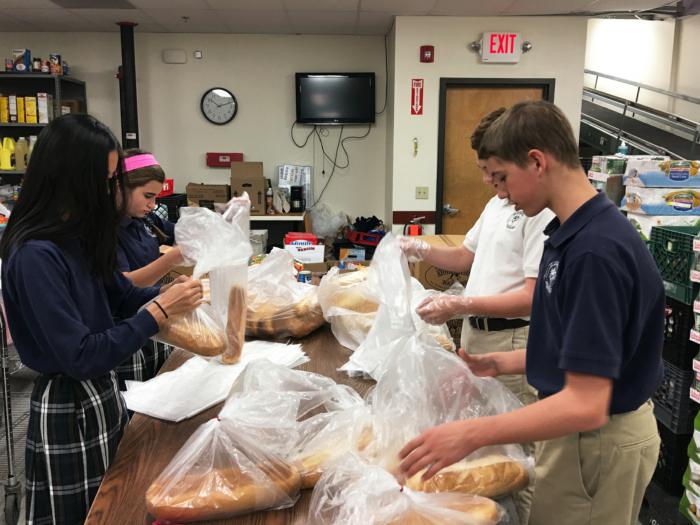 ANDOVER -- Eighth graders at St. Augustine School were given the opportunity to make a real difference in the lives of others this year.

Beginning in November, four students each week left their classrooms and were taken to Lazarus House, an emergency homeless shelter and food bank in Lawrence, where they helped prepare food for distribution.

"This school has had a long connection with Lazarus House, through fundraising, food drives and other similar activities" explained Brother Bryan Kerns, OSA.

He explained that one day, while he was volunteering at Lazarus House, he thought that it would be a wonderful experience for the students of the school to be able to participate in a more hands-on manner. He brought the idea to Paula O'Dea, the school's principal.

"She immediately was on board, and the idea was brought to fruition," he said.

Every Tuesday, Brother Bryan brought four different students to Lazarus House where they repackaged bread donated by a local bakery in order to distribute it at the food pantry.

"I don't give directions very well," he admitted, "so instead of telling the students what to do, I had them work with volunteers who have been helping out at Lazarus House for a long time. The students got a chance to learn about volunteerism from others; and the volunteers were very happy for the help."

After all 52 students had been to Lazarus House, Brother Bryan began bringing two 8th grade students every Wednesday to help distribute the food at the food pantry.

"The students really appreciated the experience and saw it as a way to put their faith into practice," he said. "Even though Andover and Lawrence are four miles away, there is a world of difference between them, and I think that the students got to experience something they've probably never experienced before."

Brother Bryan expressed his hope that the volunteering continue next school year, even though he will not be around to facilitate it.

"I was sent here from the (Augustinian) house of formation in Chicago for a pastoral year," he explained, "which is almost like an apostolic internship, but now I return to Chicago to finish my studies and be ordained a priest."

Although he was only at St. Augustine School for one year, the Pennsylvania native stated that he felt very connected to the school.

"I loved every second I was here," he said. "This is a wonderful place."