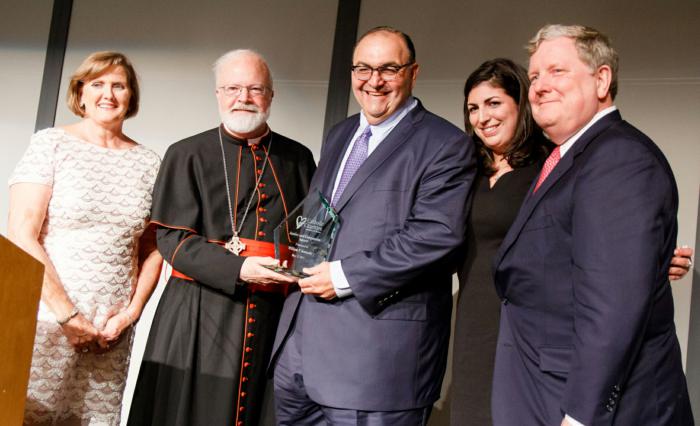 BOSTON -- Nearly 500 people gathered at the John F. Kennedy Presidential Library and Museum, May 17, for Catholic Charities' 2017 Spring Celebration, raising over $1 million for the organization's numerous programs and services.

It is an organization dedicated to aiding those in need, and one that speaks in actions, rather than words, he continued.

In addition to raising funds for Catholic Charities of the Archdiocese of Boston, the event annually honors an individual who embodies the values of charity, compassion, and service to those in need with the Justice and Compassion Award. This year's award was given to William F. Kennedy, currently a partner of Nutter McClennen and Fish LLP, following many years in public service.

Kennedy has a long career in law, as well as a lengthy career serving the Commonwealth of Massachusetts, serving as chief of staff and chief legal counsel to the Speaker of the House and the House Ways and Means Committee, as well as an assistant clerk to the Supreme Judicial Court of Massachusetts for Suffolk County.

Catholic Charities trustee Mike Sheehan, the emcee for the evening, offered a welcome to the donors before introducing Gov. Charlie Baker.

The governor, a longtime friend of Kennedy's, offered opening remarks, in which he praised Kennedy for a long and dedicated career that he said focused on aiding the state of Massachusetts.

He is a man who was "always interested in finding a solution and finding an answer and did so with an extraordinary amount of dignity and especially with the state's best interest top of mind," said the governor.

While he has gone on to have a successful career as a partner in a major Boston law firm, Kennedy has "absolutely never forgotten or stepped too far away from his interest in public service, the public sector, the communities in which he grew up, and the work that he has always believed he should be doing to improve the quality of life for the people here in the city of Boston and the Commonwealth of Massachusetts," Gov. Baker continued.

After the dinner was served, Monica Teixeira, an employee at Catholic Charities Laboure Center, addressed the room of donors.

Only 19 years old, she spoke about her childhood, how she grew up with a single parent and relied on food pantries, hand me downs, and other people, for support. No one in her family had ever gone to college, but despite that, Teixeira said she will graduate from Bunker Hill Community College on May 20 and has plans to attend Lesley University.

She said she came to the Laboure Center "hoping to make a positive influence in the lives of those in my community through Catholic Charities." She recognizes some of the struggles the people she aids are going through, Teixeira said, because she has gone through some of them herself.

"I work with many clients and each one of them have different circumstances but with the same issues -- lack of resources, guidance to meet their most basic needs, support to navigate through their communities, and a helping hand when they face crisis," she said.

"We are all part of this community, and this community cannot grow if everyone in it is falling apart. I work and study to better myself, to serve my family, and hopefully serve my community, our community," she continued, before thanking donors for their continued support.

Brief remarks of thanks by Debbie Rambo, president of Catholic Charites of the Archdiocese of Boston, were given, before Nora Kennedy, daughter of William Kennedy, introduced her father.

"Dad, thank you for everything you have done for this community, for those in this room, and particularly for me," she said, before Bill Kennedy took the stage to receive his award.

"I'm so honored and blessed to be here," said Kennedy.

"Thanks to Cardinal O'Malley and thanks to all the priests and religious in our archdiocese that serve us all so well. We're so grateful and so pleased to be part of the congregation," he continued.

"And thanks to all the laypeople in the archdiocese... without them we'd be lost," he said.

He lauded the work Catholic Charities does in aiding the underprivileged, and quoted a line from one of his favorite Bruce Springsteen songs, "If I Should Fall Behind."

"I will wait for you, but should I fall behind, please wait for me," he said. "And that's really what Catholic Charities does."

The event concluded with closing remarks from Cardinal O'Malley, who noted that, like Pope Francis, Catholic Charities speaks in actions.

"It's about deeds, it's about people," he said.

"We're very proud of the wonderful work Catholic Charities does," said the cardinal. "It's about people. It's about Catholic and Jews and Muslims and people of no faith who want to help others."

"We're so grateful for your presence here today, for the support that you give us, for the wonderful work of Debbie Rambo and the great team and all of those who are part of Catholic Charities. Thank you very much for being here tonight."