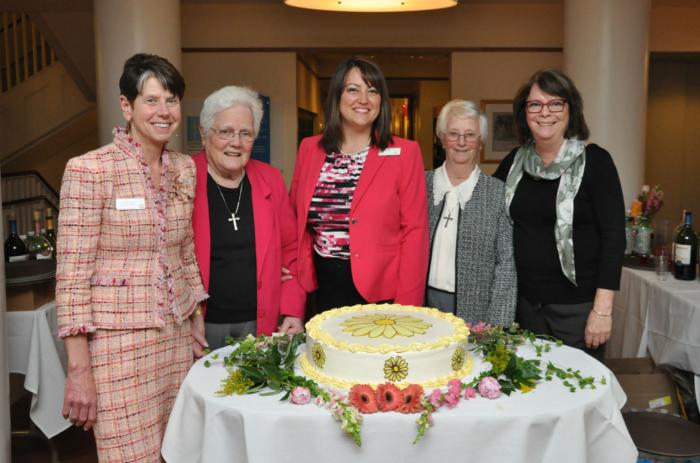 LEXINGTON -- Youville Place Assisted Living Residence marked its 20th anniversary May 5 with an evening of hors d'oeuvres, music, and a look back at its history and heritage.

The evening celebration, as well as a special Mass held the following morning, was animated by a spirit of gratitude for the Sisters of Charity of Montreal, a religious order known as "The Grey Nuns," who established the assisted living residence and continue to influence Youville's mission and core values.

The idea for Youville Place originated in the mid-1990s, when the Grey Nuns, faced with declining membership, began to plan for the future of their sprawling provincial home in Lexington. By converting it into assisted living, they believed they could address a growing need in the community that was not presently being met. They presented their plan to the town of Lexington, and in May of 1997, Youville Place -- named after Grey Nuns' foundress Marguerite d'Youville -- became the town's first assisted living residence.

According to Youville's chief operating officer, Joanne Scianna, "We achieved full occupancy very quickly, which confirmed the Grey Nuns' perception that there was great need in the Lexington community."

The Grey Nuns retained their administrative headquarters at Youville Place and were instrumental in assisting with the transition of new residents and families. In 1998, they were awarded the Outstanding Volunteer Services Award from the Massachusetts Assisted Living Federation. "It was the Grey Nuns who taught us how to serve and incorporate our mission and values into our daily work," says Scianna.

Many of the Grey Nuns present at the 20th anniversary celebration are now themselves assisted living residents.

Sister June Ketterer, SGM, who was active in transitioning the home into an assisted living residence, reflected back on the 20 years that have passed.

"I feel that I have come full circle. This house was originally built to educate our younger sisters and take care of our elderly sisters," she said. "I was the first sister to enter the congregation in this building. Now, I'm here as a resident. I know that whatever the future brings, Youville will continue to evolve and meet the new needs of the community."