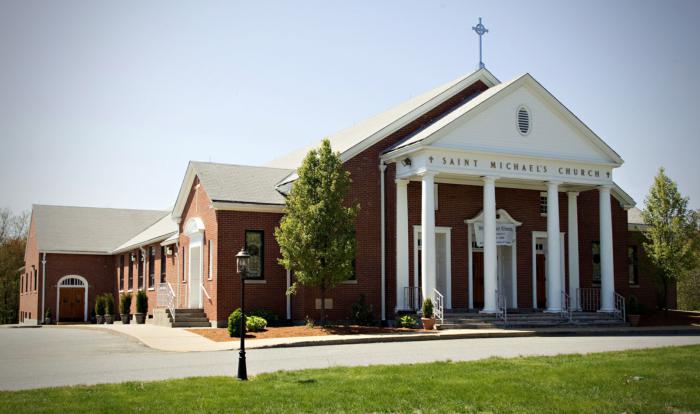 St. Michael Church was among the targets of an Avon man who went on an early morning vandalism spree in the town May 12. Pilot file photo

AVON -- It was early Friday morning, May 12, when Father Thomas Boudreau, pastor of St. Michael Parish in Avon, was woken up "by a large hunk of tar coming through my dining room window."

He said he was "jolted" out of bed and went downstairs to investigate the damage and call the police. It was then, as he opened his back door, that he realized the person responsible for the damage was standing on his back porch.

Four parish windows -- three stained glass windows in St. Michael Church and a window in the rectory -- were smashed that morning. A number of windows in the neighboring Avon Baptist Church were damaged as well.

Speaking to The Pilot later that morning, Father Boudreau said the suspect, Brian Raynard of Avon, appeared troubled when he saw him on his porch.

"I didn't dare step outside," said Father Boudreau, but "I did have a little one-on-one with him."

Father Boudreau questioned him about the damage, but Raynard turned and ran. Father Boudreau called the police again, giving Raynard's location later providing a physical description of him. It was that information that enabled the police to find and arrest him only minutes later.

According to The Brockton Enterprise, Raynard was also found to have slashed a number tires on local police cruisers that morning, and was arrested and charged with 20 counts of malicious damage.

The damaged windows are only around 15 years old and can be "easily replaced," Father Boudreau explained.

Thankfully, he said, the medallions within the windows, which depict saints and originally came from a closed church, were not damaged.

In contrast, he said, the windows that were smashed in the Avon Baptist Church were likely over 150 years old.

Yet, despite the damage Raynard caused, Father Boudreau said he would pray for him.

"Clearly he's a man who's got issues and crosses to bear, and in my mind we just need to keep him in our prayers," he said.

"We just need to pray for him."