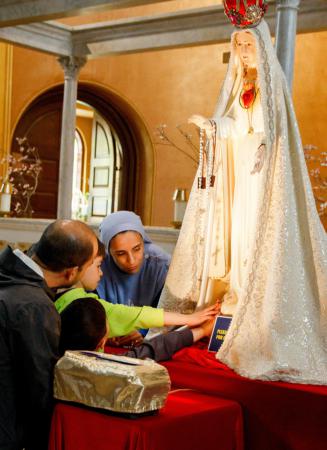 Mother Olga Yaqob leads children in venerating the Immaculate Heart of Our Lady of Fatima Statue May 13 at St. Mary Parish in Waltham. Pilot Photo/Mark Labbe

WALTHAM -- It was 100 years ago that Our Lady of Fatima first appeared to three young shepherd children in Portugal and spoke to them messages of love and of hope. Yet, today, even 100 years later, said Bishop Robert Reed, that message still lives on.

Giving the homily during a morning Mass at St. Mary Parish in Waltham, May 13, Bishop Reed addressed the large number of faithful in pews, who had gathered at the church to venerate the visiting Immaculate Heart of Our Lady of Fatima Statue.

The statue, under the custody of the World Apostolate of Fatima, USA, depicts an image of Our Lady as she appeared to Sister Lucia Santos, one of the three children to first see Our Lady in 1917, as she appeared to her again in 1929. It was blessed by Pope Francis in 2013, and is one of three statues that now regularly travel across the United States, spreading the messages of hope, love and peace of Our Lady.

The statue is in the Archdiocese of Boston from May 1 to May 22, visiting a total of 22 parishes and two prisons. The showing of the statue at St. Mary, however, was the most prominent showing; taking place exactly 100 years after Our Lady first appeared to the children on May 13, 1917.

In his homily, Bishop Reed spoke of that appearance and of the message Our Lady brought.

"She came to (the three children) with a message that was very simple and basic -- that their prayers and that their sacrifices as three little children could actually stop a world war, firstly, and could actually help rescue people from the suffering that we all experience because of our human frailties," he said.

"What a beautiful message, what a message of tremendous hope. And that message, 100 years later, causes us to gather here in prayer at the altar this morning," he continued.

An apparition of Our Lady ultimately appeared to the three children -- Lucia Santos and her cousins Jacinta and Francisco Marto -- a total of six times between May 13 and Oct. 13 of 1917.

Pope Francis canonized Jacinta and Francisco Marto in Rome on May 13.

During those appearances, said Bishop Reed, the apparition asked the children if they would offer themselves to God and bear his sufferings. They responded that they would.

That's called "taking up the mission," said the bishop.

When the apparition heard the children's affirming answers, it bathed them in a white light, and the children then loved God even more deeply.

"I hope this day and this Mass will have a similar effect upon you and upon me," he said.

The message of the day, then, is this, he continued: Mary deeply desires to help us, and through her "Immaculate Heart, she wants to bring the world back to God" and have each and every one of us know her son and his mercy.

Through prayer and through sacrifice, Bishop Reed continued, that can be obtained.

"It might be tempting to think that our own small sacrifices and our simple prayers won't make much of a difference. But, it's not true," he said.

The event at St. Mary continued with a talk from Ying Palmos, custodian of the statue, who also spoke on the message of Our Lady of Fatima, and Mother Olga Yaqob, superior of the Daughters of Mary of Nazareth. The day also included recitation of the rosary led by children, a Holy Hour of Mercy, benediction and a vigil Mass, with periods for veneration interspersed.

For Richard Ducet, venerating the statue was "beautiful."

"I came here trying to get healed," he said, noting that he has been a diabetic for the past 20 years and had heard the statue could heal.

"It's a beautiful relic," he added.

Julie Carbone, who was allowed to briefly wear the statue's veil, said she felt "like I was one with Our Lady" when it was on.

"I felt like she's my mother, she's with me forever, all the time," she said, tears in her eyes.

"I really felt like she gave me the message (that) she's there with me, I can go to her anytime."

Speaking to The Pilot May 16, Lynn Kenn, president of the World Apostolate of Fatima, Boston, noted that the archdiocese petitions to have a statue visit every five years. She wasn't expecting to receive the Immaculate Heart statue, she said, but was delighted to have been given that one, as the Sanctuary of Fatima in Portugal dedicated the year of 2017 specifically to the Immaculate Heart.

"So, we just felt very blessed that we were getting that particular statue for that reason," she said.

The celebrations, said in Portuguese, saw around two to three thousand people attend, she estimated, including the visiting Cardinal Arlindo Gomes of Cape Verde. People processed outside, braving the rain, and the day ended with a barbeque.

"They did a beautiful job," she said.

The remaining stops on the statue's tour are: