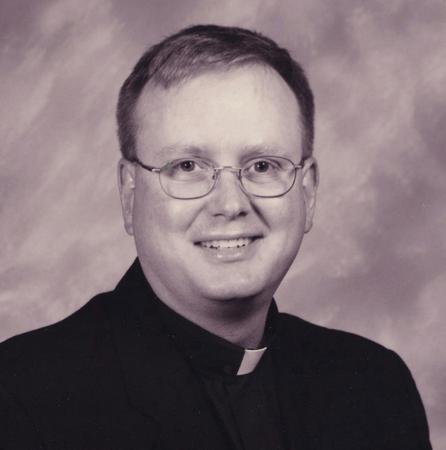 Although he had been dealing with some serious health issues in the past months, the death on May 3 of Father Edward F. Doughty at Boston Medical Center was unexpected. The Winchester native had undergone heart surgery and was recovering slowly but steadily first at Regina Cleri Residence and then at Marian Manor in South Boston.

Edward F. Doughty was one of Frances (O'Connell) Doughty and the late John Doughty's children. Raised in Woburn prior to the family's move to Billerica, Ed was an alumnus of Woburn High School and then was granted a Bachelor in Music from the University of Massachusetts in Lowell. He served for a time in the United States Marine Corps band, about which he boasted of the bands appearances at civic and military events large and small.

He entered St. John's Seminary as a member of the Class of 1995 and Bernard Cardinal Law ordained him to the priesthood at Holy Cross Cathedral on May 20, 1995. His first three assignments, between 1995 and 2003, were as parochial vicar in St. Richard of Chichester, Danvers; St. Bonaventure, Plymouth; and St. Jerome, Weymouth.

Archbishop O'Malley named him pastor at St. Bernadette Parish in Randolph where he served for one term, 2003-2009.

He was named a parochial vicar at Gate of Heaven and St. Brigid parishes in South Boston in 2009. Father Robert E. Casey the current pastor of both South Boston parishes and a concelebrant at the Funeral Mass said "Father Doughty was a good priest; great to have in the rectory; ready and willing to do anything for anyone in the parish; he really added so much to the life of the rectory and the parish."

In 2010 he was appointed Campus Minister at both the University of Massachusetts at Boston and at Salem State University. In 2011, he assumed the additional responsibility as administrator of St. Francis of Assisi Parish in Medford. The following year he was named pastor of the Medford parish and ended his service as campus minister.

In June 2014, Cardinal O'Malley named him pastor of St. Joseph and St. Francis of Assisi Parishes, both in Medford. Just two years later he resigned as pastor of both parishes as his health deteriorated. Although his health limited his priestly ministry he was still able and willing to assist as he could in parishes.

Merrimack Regional Bishop Robert Hennessey recalled Eddie's presence at one of the priests' retreat at Bethany Center in Florida. "Eddie would be perched in a rocker on the porch overlooking Lake Mary on the center's grounds. Inevitably he had lighted up a cigar and had an audience of other priests listening to his commentary on life, parish and campus ministry, and, of course, his Marine Corps experiences -- Band only. Not content with the audience in his own cottage, he moved freely among the others -- cigar and tales at the ready."