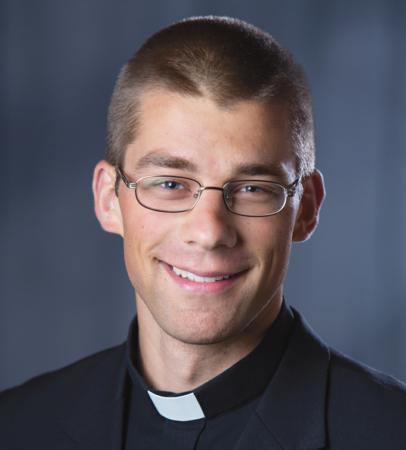 This is the seventh in a series of articles profiling each of the eight men who will be ordained to the priesthood by Cardinal Seán P. O'Malley on May 20.

Deacon Michael Zimmerman's journey to the priesthood has its foundations in his home parish of St. Joseph, Needham. The middle of three children, with one older sister and a younger brother, Deacon Zimmerman grew up in Needham, where he attended his parish school.

"Our family was involved in the school and parish life and town activities, usually due to the prompting of my mother," the 28-year-old recalled, adding that he and his siblings were all altar servers at St. Joseph Parish.

"It was through their community, retreats, and pilgrimages that I converted to an intentional and practiced faith," recounted Deacon Zimmerman. Two other important events also came about due to his involvement in Life Teen -- he met his longtime girlfriend, and he first began to think God was inviting him to be a priest.

"On a retreat my senior year of high school the speaker posed the question, 'What are you willing to offer God?' As I prayed about that I told Him, 'I want to offer you everything,' but then the thought of giving up my future and my girlfriend entered my mind. I did not like the idea of that and promptly stopped that train of thought," he recounted.

After graduating from Xaverian, Deacon Zimmerman attended Boston University, where he became involved in the Newman Catholic Center, ultimately becoming a member of the executive board. At the Newman Center, he began to get to know members of the Brotherhood of Hope, an order of religious men who were involved in the campus ministry program.

"In my freshman year of college, I did a spring break trip with several other men where we stayed at the Brotherhood of Hope's house and ran retreats and events for the parish and Catholic schools in South Boston for the week. I loved the prayer, community, and service and I considered that I could see myself doing this," Deacon Zimmerman explained. "When I told my girlfriend the next week that I could see myself as a priest, she was not pleased."

The following year, Deacon Zimmerman and his girlfriend broke up.

"There was some adjustment to the single life as I needed something to replace those hour-long phone conversations every night," Deacon Zimmerman said. "Fittingly, the replacement was prayer."

That summer, he travelled to Panama on a mission trip with the Salesian Sisters, where he taught English to local students. It was during this time that God sealed in him the desire to be a priest.

"I recognized that it was God who has made me happy and that I still felt that he wanted me to continue to pursue him," he said. "It changed my vocation from something I was just going along with for the ride, to becoming an act of free will, and thus an act of love."

Also in Panama, he began to see the need to evangelize.

"I saw I could not solve the poverty there and education could not do it alone, either. But what every person needs, from the rich students at BU to the poor kids in rural Panama, is the love of Jesus Christ," he said. "I wanted to bring that love to people, to be that face of love, to be those hands of love, to be that voice of love to his people. If God wanted me to do that in ordained ministry, then that is who I wanted to be and is what I wanted to do."

Armed with that zeal, Deacon Zimmerman applied to St. John's Seminary in Brighton. At first, his family was a bit shocked, he said.

After completing two years of pre-theology, Deacon Zimmerman was chosen to attend the Pontifical North American College in Rome in 2013. This past September, on his feast day, Sept. 29, he was ordained a transitional deacon by Cardinal Seán P. O'Malley at St. Peter's Basilica in Rome.

"I look forward to many aspects of priestly ministry and my ongoing formation: celebrating Mass, visiting the sick, serving the poor, preparing couples for marriage, preaching and teaching, fraternity with brother priests," he mused. "If I had to pick one, I would say hearing confessions. It's a privileged time of intimacy, mercy, and counsel and one of the clearest ways I've seen God at work in my life."