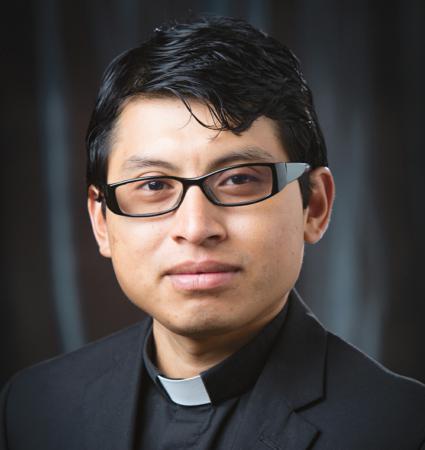 This is the eighth in a series of articles profiling each of the eight men who will be ordained to the priesthood by Cardinal Seán P. O'Malley on May 20.

Seven years ago, Deacon Americo Santos left his country, his family and his world behind to follow God.

"Before 2010, I would sometimes visit Boston for pleasure -- I knew some people who had come here from my country, El Salvador," Deacon Santos said. "But in 2010, I came because I received a call from God to serve his Church in the priesthood -- to make a difference in society and to help those who are most in need of God's help."

Growing up in Agua Caliente, a town in Chalatenango, El Salvador, Deacon Santos had always been involved in his home parish. The third of five children, Deacon Santos often thought about becoming a priest.

As a young man, he began teaching religious education in his parish, the Church of San Jose, ultimately working as a youth minister in his parish.

"Being in that environment, I decided to go into the seminary in El Salvador," he explained. However, after a brief time in the seminary, he realized he needed time to discern his vocation.

"Everything was pushing me in that direction, but still I hesitated," the 34-year-old said.

That year, Deacon Santos came to Massachusetts to visit to friends who had been ordained priests in Boston.

"Really it was their witness that got me moving," he said. "They helped me to apply to the seminary in Boston, and really to begin my life here."

Smiling, Deacon Santos said, "It has changed my life completely."

"Having been in a seminary before, I really wasn't expecting such support -- support from my fellow seminarians, from the faculty and staff who have always been so helpful, from my friends," he said.

"This has been such a beautiful experience that, now that it is coming to a close, I am sure I will miss it," said Deacon Santos pensively. "This has been my home and I have really felt so much support here."

Looking ahead, Deacon Santos is eager to serve the Church as a priest.

He added that he is aware of the challenges ahead of him.

"There is a big challenge to serve the Catholic community and the wider world because we are in a society where God is in the second place, sometimes not even the second place but the last place," he said, adding that "It will be a personal challenge to live the priesthood in a world that is so involved in technology, in politics, in consumerism."

"All these things lead to people becoming indifferent to God -- it's not so much that they don't believe, but that they don't care," he continued. "I want to show them that God does exist, that the Church is relevant to today, that there is an entirely different way to live that leads to being happy."

Deacon Santos noted that he is very much inspired by Blessed Oscar Romero, a Salvadoran archbishop who was assassinated while celebrating Mass in 1980.

"I look up to him -- to his dedication to proclaim the Gospel, giving witness in his life, not just with his words," he said. "He always was defending the poor -- that's the kind of priest I want to be. Someone who isn't afraid to speak up for the poor, who lives the Gospel in the flesh."

"That is what I pray for -- to be a holy priest that will serve the Church in Boston," Deacon Santos said.