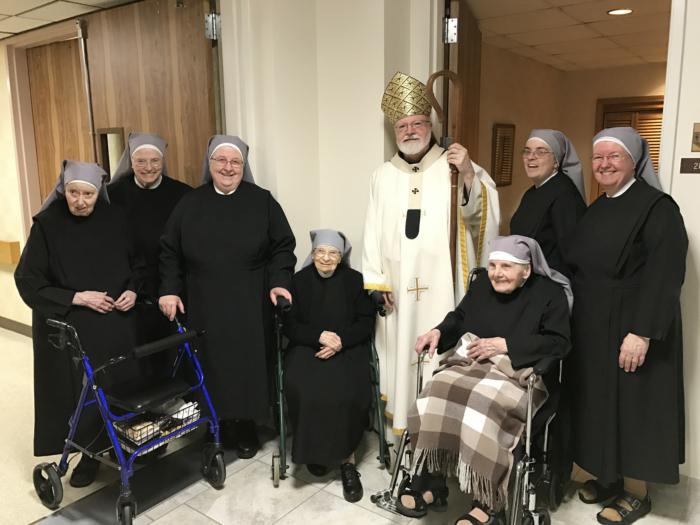 'Saturday afternoon, I went to the Jeanne Jugan Residence in Somerville to attend the fundraising dinner for Little Sisters of the Poor.' Pilot photo/CardinalSeansBlog.org

Saturday (4/29), I went to Our Lady Help of Christians in Newton to celebrate the confirmations of young men and women formed through our campus ministries in the archdiocese. Msgr. Bill Fay and the other college chaplains were there with us to join in the happy occasion.

We are so grateful for the work that is being done in our campus ministry. There are about 65 colleges and universities in the archdiocese, so this is a very important mission for us. We are grateful to all of the men and women religious, priests, deacons, FOCUS missionaries and other lay people who work in ministering to college students throughout the archdiocese.

Saturday afternoon, I went to the Jeanne Jugan Residence in Somerville to attend the fundraising dinner for Little Sisters of the Poor. This is such an important event because the Sisters depend very much on providence for the maintenance of their ministries to the elderly and the poor.

We began our gathering with Mass, followed by the dinner, which was just marvelous. We also presented the mother of Father Bob Blaney with a commemorative plate from the Galway Cathedral because some of her family had been involved with the construction of the cathedral. During the dinner, a number of items were auctioned. Perhaps the most popular was a football autographed by Tom Brady donated by the New England Patriots. It caused quite a stir and became something of bidding war -- all the better for the Sisters!

Also, while I was at the Jeanne Jugan Residence, I was able to visit Bishop Elliott Thomas, the retired Bishop of the Virgin Islands, who now resides there under the care of the Little Sisters of the Poor. He's doing very well and it was wonderful to spend some time with him.

On Sunday (4/30), I went to St. Joseph Parish in Needham to celebrate the Mass to commemorate their Centennial Anniversary.

At the Mass, we were joined by many priests including, of course, by Father David Michael, who is the pastor at St. Joseph's, but also by Msgr. Frank McGann, who is in residence there and this week celebrated his 68th anniversary of priestly ordination! We presented the parish with a Papal Blessing on the occasion of their centenary.

After the Mass, there was a lovely reception and the students of the parish put on a wonderful musical program. We are so grateful to Father David Michael, not only for his pastoral leadership at St. Joseph's but also for all that he does in our interfaith and ecumenical outreach in the archdiocese.

Then on Monday (5/1), we celebrated the opening of the new Action for Boston Community Development (ABCD) early childhood education center that is housed in the former Cathedral Grammar School. The facility will serve children from birth to six years old, many of whom have disabilities and challenges.

As I mentioned in my remarks, the Cathedral Grammar School was founded 150 years ago in the basement of the Cathedral and then 100 years ago they relocated to this building, and now we are so glad to see that it will continue the mission of helping the children of the area.