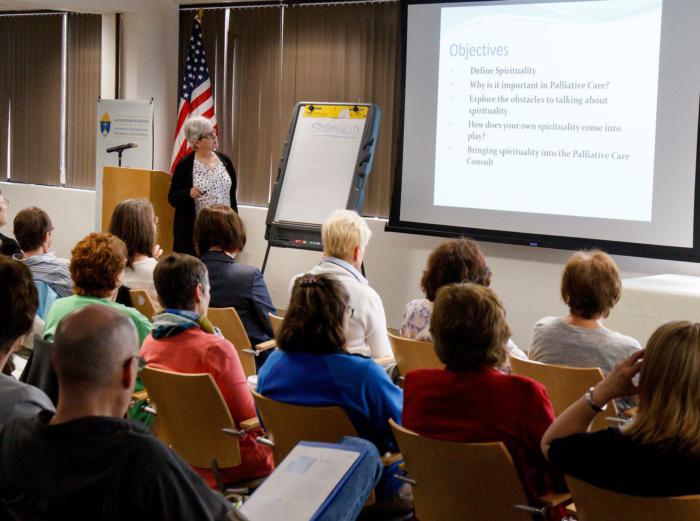 BRAINTREE -- Dozens of health care professionals, pastoral staff, and others interested in palliative care gathered April 30 at the Archdiocese of Boston's Braintree headquarters for the second annual Palliative Care Colloquium.

Sponsored by the archdiocese and led by MC Sullivan, head of the Archdiocese of Boston's Initiative on Palliative Care and Advanced Care Planning, the colloquium featured speakers well-known in their work in palliative care, a health care model that attempts not just to treat a patient's immediate symptoms, but instead treat the whole patient.

The Initiative on Palliative Care and Advanced Care Planning, founded in 2015, has the goal of educating and informing people, parishes, and organizations within the archdiocese and beyond on palliative care, which has been promoted by the archdiocese as a way to combat the growing movement advancing physician-assisted suicide as an answer to patient suffering.

Typically aimed at patients willillnesses, palliative care seeks to establish an interdisciplinary team to address many of a patient's needs, including spiritual, psychosocial, and physical. At a minimum, that team might be made up of physicians, nurses, social workers, and chaplains.

During this year's colloquium, themed "Integrating Spirituality into the Care for the Seriously Ill," Sullivan offered a brief welcome, during which she reaffirmed the archdiocese's support of palliative care and urged parishes to call her office to schedule "workshops" on the health care model.

Cardinal Seán P. O'Malley, via a video message, also offered a brief welcome, and Father William Joy, assistant vicar for Administration and special assistant to the vicar general, extended a greeting on behalf of the vicar general.

All three talks touched upon the importance of integrating spirituality into caregiving, and how spirituality can help bring families together or help an individual recognize more about himself or herself.

It's important to ask about a patient's spirituality and to address it, said O'Brien, and for the health care provider to have some "spiritual boldness" when doing so. Spirituality forms and strengthens connections, she said, and illness disrupts them.

"Healing, on the other hand, is seen as the restoration of these disruptions, and is really the goal of any treatment, and it has to address the whole person -- body, mind, and spirit," she said.

Hess, in her talk, also noted how spirituality and healing can keep us connected, "keep us open."

She spoke about the difficulties, as well as the graces of working in palliative care. The work can serve as a reminder of our "dual citizenship," she said, quoting famed writer, political activist, and filmmaker Susan Sontag.

Thinking about it, it can make us "fearful, anxious, or it can open us up," widen us, and "increase our love and appreciation for the gift that is each breath of life God gives us moment by moment," she said.

The human-to-human encounter, seeing a patient as a person and the importance of addressing the needs of the whole person rather than the immediate symptoms of a patient, is something each speaker noted, yet Scionti, speaking last, perhaps emphasized the most.

Like O'Brien, she also offered anecdotes of occasions she assisted patients by "humanizing" them, relating to them, and discovering their needs beyond mere physical care. In almost each story, Scionti noted how vital it is to "dig deeper into a person" to see what is really bothering him or her, with it often being a spiritual or emotional problem rather than solely a physical one.

She ended her talk with a quote from Pope Francis on palliative care -- "Palliative care is an expression of the properly human attitude of taking care of one another, especially of those who suffer. It bears witness that the human person is always precious."

Offering closing remarks before the colloquium ended with a Mass celebrated by Father Bryan Hehir, secretary for Health and Social Services for the archdiocese, Sullivan commented on the three speakers, thanking them for their time and noting how each touched on similar themes.

"What you're talking about is getting to know these people because that is how we show them dignity, and for those of us sitting in this room, all of us are people of faith, the sole purpose for that is because we are, each of us -- patient, caregiver, family member, total stranger -- made in the image of God, and we don't know what aspect or presentation that image is until we take the time to see the image" she said.

"It is the crucial component of palliative care, it is the essence of, frankly, health care. It is the touchstone, it is the reason, and it is the goal... of all of our human relationships," she continued.

Without spirituality, she said, "we aren't doing palliative care."