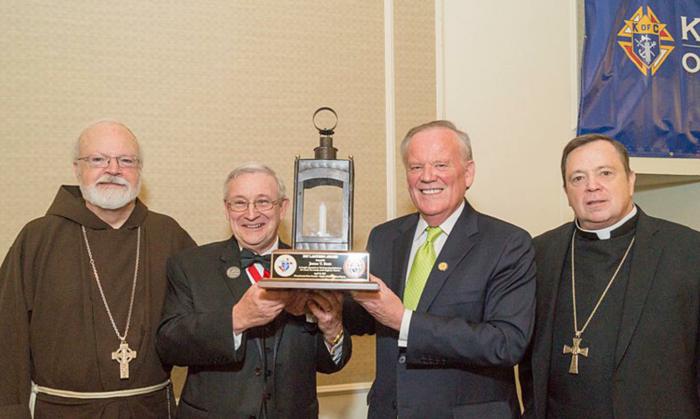 Established in 1957 to honor those who reflect the religious and patriotic ideals of the Founding Fathers, The Lantern Award is named for the lanterns placed in the tower of the Old North Church in Boston to warn Paul Revere of the invading British at the outset of the American Revolutionary War. It is given annually by the Massachusetts State Council at the Patriots' Day Dinner.

Cardinal Seán P. O'Malley and Massachusetts Knights of Columbus State Deputy Paul G. O'Sullivan presented the 61st Lantern Award -- a wood-mounted, encased candle -- to Brett, who has served as president and CEO of the New England Council since 1996.

Prior to that, Brett served for over 15 years as a member of the Massachusetts House of Representatives, and taking on a variety of leadership positions over the years.

Additionally, through his involvement with a number of committees, boards, and organizations throughout New England and Washington, D.C., Brett has maintained a leading voice in advocating for public policy issues such as health care, education, financial services, and energy.

The dinner's program was led by past Grand Knight Michael Riley of 98.5 FM The Sports Hub and WBZ Radio 1030 AM, and included an invocation by Cardinal O'Malley and a welcome and benediction delivered by State Chaplain Bishop Robert Hennessy. David Dobson, former Master of the Fourth Degree, sang the National Anthem and the finale song, "God Bless America."